This Week in History: the birth of Whistler Ski Resort

Within the BC Archives collection is an album is filled with Beautiful BC Magazine archive photos of Whistler Ski Resort.

Marion Tustanoff, BC Archives Collections Manager, explains that it was around 1858 that pioneers began exploring the region.

“But it really didn’t boom until about the 1880’s, when the Pemberton Trail was opened.   That’s when we had the trappers, and the miners, and all those rugged men up there.  And once that opened, I think there was more of an influx of the pioneer folk.”

The next big change was in 1911, when John Millar arrived in the area.

“He was a big strapping Texan, and he was a trapper, and he had a wayhouse up there where people would stop and stay.”

On a visit to Vancouver, Millar met an American couple who wanted to open a fishing lodge “and he regaled them of the stories of these amazing lakes up in the mountains, and they thought this would be a good idea to go up and check it out” says Tustanoff.

The three took a boat to Squamish, then hiked in to the community known as Alta Lake.

The couple, Myrtle and Alex Philips, eventually bought 10 acres, and in 1913 built Rainbow Lodge.  It was the largest lodge west of Banff.

“Coincidentally” says Tustanoff, “the railway came through at the same time.  So Vancouverites were able to take a train up into the mountains for the first time.  And that’s when Alta Lake just went ‘boom!'”

By the 1930’s, there was a small village community, and life at Alta Lake hummed along with mining, logging, tourism.

Then, came the 1960’s, when a group of businessmen saw the huge potential at Alta Lake, and decided to open a ski hill.  Their goal was to bring the Olympics to British Columbia. They formed the Garibaldi Olympic Development Association.

“They had no electricity, no sewer, no roads, but they were able to put in a chairlift, two tow ropes, and a gondola” says Tustanoff.

Tustanoff goes on to explain that in 1974, the NDP government took notice.

“They realized things were going gangbusters up there – lots of squatters, and hippies, and snow bums, and the village was being developed haphazardly, and so, they put a development freeze on it.”

And created the first resort municipality in Canada.

Now, around three million people visit Whistler every year. The resort entertains visitors both in winter, and in summer. 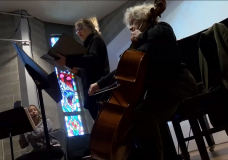 SoundCHEK: Faculty members at The Victoria Conservatory of music continue with the rich tradition of Chamber Music