“This is the winter coat for Duff Pattullo’s daughter Doris, and she wore it on the streets of Prince Rupert about 1910.”

Lorne Hammond, Curator of History at the Royal B.C. Museum, is pointing to a fur jacket, donated to the BC Archives from the family of Thomas Dufferin Pattullo.

“Everybody called him Duff,” says Hammond.  “He’s the 22nd premier of British Columbia.

“He was born in Woodstock, Ontario in 1873.  In 1897, Pattullo headed west as Secretary to the Gold Commissioner for the Yukon.

“He was wheeling and dealing, and left the Gold Commissioner position and went into real estate, and business, and was very successful.”

In 1906, Pattullo moved his family from the Yukon to Prince Rupert.

“And he became alderman,” says Hammond, “then he became mayor, and then he was elected the Member of the Legislature for Prince Rupert.”

Pattullo served until 1928, when his government was defeated.  His party voted him Leader of the Opposition, and in 1933, in the middle of the Great Depression, Pattullo became Premier of BC.

“He hosted President Roosevelt, and Eleanor Roosevelt when they stopped in Victoria.  He hosted the King and Queen on their pre-World War tour in 1939.”

As premier, Pattullo’s vision to get his province through the Depression was building and infrastructure.  That vision included B.C.’s biggest construction project during that period, a bridge across the Fraser River at New Westminster.

“It was a $4 million dollar project in 1936 dollars,” says Hammond, “and it was completed in one year.  It employed hundreds of people.  It was seen as an engineering masterpiece.”

There are other treasures donated to the B.C. Archives from the family, including a silver tray, given to Pattullo from the grateful residents of New Westminister, to celebrate the opening off of the Pattullo Bridge.

Another donation was Pattullo’s appointment book.  Hammond puts on protective gloves and then opens the book to the first week of September.

“On the 3rd of September,” says Hammond, “Britain declared war. Canada didn’t follow until seven days later, and so when you open his appointment book, suddenly you see [notations indicating] every civil servant in government coming in.  All the heads are coming in for five-minute meetings, over and over again.  You just get a sense from this book of the whirlwind in the week before Canada declared war.”

Hammond is grateful to Pattullo’s family for these donations.

“Our collections are vast in the B.C. Archives in terms of our archival records, but we’ve had a series of donations which has come from his granddaughters, and those are the ones that I’m really very proud of to have in our collections.” 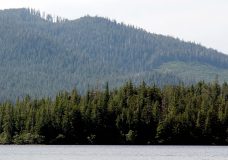