This Week in History: Peter Cotton, an important Victoria architect

Posted: Jan. 11, 2020 5:12PM | Last Updated: Jan. 13, 2020 1:44PM
CHEK
WatchThere are many remarkably talented architects who have left their stamp on iconic buildings across Greater Victoria, including Peter Cotton. He died in 1978, at 68 years old, but his life-story is safely preserved at the BC Archives.

In the BC Archives, there are thousands of fascinating life-stories safely preserved in the form of journals, letters, documents, photographs, government records, and works of art.

One of those stories is that of Peter Neve Cotton, one of Victoria’s most distinguished architects.

Born in Merritt in March of 1910, Peter Cotton grew up in New Westminster and was stationed in Europe during the Second World War.

“He was commissioned to join the British Secret Service,” said Marion Tustanoff, collections manager at the Government Records Division of the BC Archives.

“He was in the aerial photography department, where he would go up in the planes and take spy pictures.  He was stationed in some very interesting spots, and that’s where he started his love for design and architecture” Tustanoff said.

After the war, Cotton enrolled at the University of British Columbia in Vancouver.

“He began an architecture club there, and like-minded students got together, and they decided they would ask the president at the time if they could have an actual degree for architecture.  So Peter Cotton was very significant in starting the architectural degree program at UBC.”

“They won quite a few awards over in Italy,” Tustanoff said.  “He won national awards as well.  Started up a brick and mortar store in Vancouver. Unfortunately, that didn’t fly, so they decided just to sell commercially.”

Peter Cotton moved to Victoria in the late 1950s.

“I think probably his iconic design was his own house, on Toronto Street, [in the James Bay neighbourhood of Victoria] which is still standing,” Tustanoff said.

Cotton was hired to modernize the Ladies Lounge at the Victoria Union Club, which he filled with his ceramics, art, furniture, and lamp designs.

“It was quite a splash!” Tustanoff said.

“He was very interested in keeping the heritage houses and buildings of Victoria intact.  He was hired as the architect for the Public Works Department of BC, and was tasked with rebuilding Government House after its fire.”

A fascinating life, safely preserved at the BC Archives for researchers around the world. 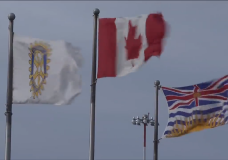