The couple that owns the tiny Chemainus business Baby Bear’s Ice Cream Shoppe is considering selling their business after one of their bear statues was stolen from outside the shop.

Ward Yeager, who owns the business along with Kathy Yeager, was near tears Monday as he walked out to the garden behind his business. Earlier that morning, at 2:31 a.m., surveillance video recorded video of a suspect walking up to the three bears and kicking the “baby” bear over.  The suspect then takes off with the smallest bear.

“A little bear holding two ice cream cones. Fourteen years, people have enjoyed the garden. And taking their picture with the bears. Something that’s so pointless. There’ll be a lot of little kids that’ll be disappointed because they come all the time to see the bear’s hand or give him a hug.”

All that remains of the bear that cost the small business thousands to have carved are the iron pegs that held the statue.

“Oh it’s horrible in a small town like ours,” said neighbour Alessandra Fish.

“Like what a senseless thing to do to such a great part of our community. Like these guys just work so hard to make Chemainus happen to them and to have that happen to them.”

The couple is now considering selling their 14-year business.

“I think the person should be ashamed of themselves,” said.

RCMP have fingerprinted the area the thief is seen holding in the video.

With the release of the surveillance video, the owners of Baby Bear’s Ice Cream hope the person responsible will be caught and even maybe they’re baby bear will be brought home. 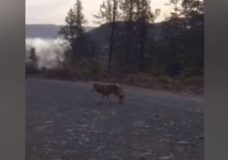 James Bay wolf relocated to undisclosed location on west side of Island, confirmed to be Takaya 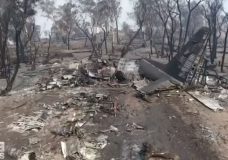