James Bay wolf relocated to undisclosed location on west side of Island, confirmed to be Takaya

January 28, 2020 updated
CHEK
WatchThe James Bay wolf is released back into the wild Monday and experts are now confident it's Takaya, the Discovery Island wolf. But as Tess van Straaten reports, he won't be going back there.

The wolf that was roaming Victoria’s James Bay neighbourhood this weekend has been successfully relocated to an undisclosed location on the west side of Vancouver Island, according to the BC Conservation Officer Service.

The animal, an older adult male, was captured in a James Bay backyard Sunday evening.

“I don’t think anything is textbook about tranquilizing a wolf in James Bay but it definitely went well,” says conservation officer Mark Kissinger.

The capture and release come after an unsettling 24 hours in the downtown Victoria neighbourhood.

“This wolf has been running around James Bay for awhile, it’s stressed, it’s probably had one of the worst weekends of his life,” says Victoria Police Department spokesperson Bowen Osoko.

After a flurry of sightings, he laid low until late Sunday afternoon.

Police tracked the animal to Cindy Meiklejohn’s backyard, where it was tranquilized.

“We saw all this action outside and it was full of VicPD,” Cindy Meiklejohn explains. “I said, ‘what’s going on’ and they said, ‘well there’s a wolf in your backyard and just stay inside please ma’am’.

“I can say with 99 per cent certainty that it is Takaya,” says Cheryl Alexander, a wolf expert who’s documented Takaya’s life. “I’ve compared his teeth, how his teeth were broken, which I have photos of, and they found that on this wolf.”

But she suspects the wolf might have come ashore for food since seals have been harder to catch in the stormy weather we’ve had this past month.

The wolf is being released into an undisclosed wilderness location along the coast.

BC Conservation won’t say where but it will not be Discovery Island, to prevent Takaya from swimming back again.

“It may not end well the next time and he might have to be shot, so in a way, it’s a wise decision not to put him back there,” Anderson says. “It’s the best possible outcome for him to be free, to be in the wilderness and he has a chance of surviving.”

But at almost 11, Takaya’s way past the typical wolf lifespan and may not have much time left. 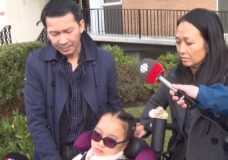 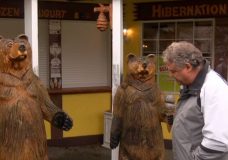