‘They need to be caught’: Stealing spree continues to target downtown Victoria businesses

The Alcheringa Gallery in Victoria is decked out with sensors, cameras, and thick security glass, all to protect the Indigenous-made art it sells.

“It’s quite unnerving for sure, every night when I lock up I think about it,” said the owner, Mark Loria.

The amount of security may seem like overkill, but it has become necessary for many businesses in downtown Victoria due to a recent rash of break-ins.

Victoria Police says more than two dozen shops have been broken into in the past month and a half. They believe all of these break-ins are done by the same person, who seems to have special tools and the ability to carefully remove glass from windows panes.

Fortunately for the Alcheringa Gallery, they haven’t been targeted but Loria says he is extremely worried.

“We have up-to-date security systems in place, but it’s more about being unsure about what’s going on in the street and we do have fine art here that is valuable. The bottom line is, we’re concerned about artists losing their art,” said Loria, who supports more than 100 Indigenous artists from B.C. and across Canada.

With security seemingly shattered for businesses, the Downtown Victoria Business Association (DVBA) says it’s time to do something about it by increasing the number of police officers in the area.

“At a time when businesses are literally just hanging on by a thread, this is the type of thing that could push a business over the edge,” said Jeff Bray, executive director of the DVBA.

Victoria’s mayor says upping the funding for police isn’t off the table, but it’s not the city that decides where officers go.

Helps has full confidence the VicPD will catch the criminal behind the stealing streak.

Hopefully, the culprit caught soon, before downtown businesses are forced to leave. Something the art gallery doesn’t want to do but says it would consider it in the future.

“We would consider going somewhere else if it got bad enough and we were worried all the time, and we did have a break-in. We would start thinking about it,” said Loria. 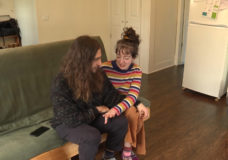