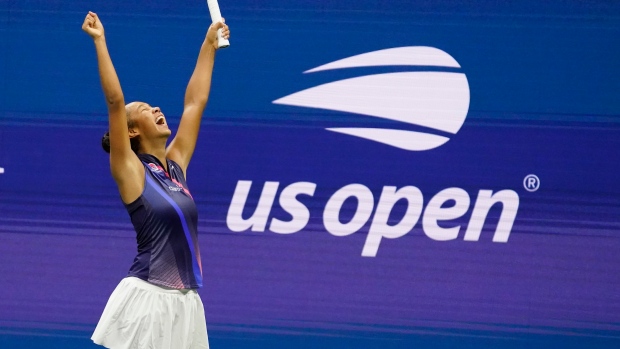 CHEK
Leylah Fernandez, of Canada, reacts after defeating Naomi Osaka, of Japan, during the third round of the US Open tennis championships, Friday, Sept. 3, 2021, in New York. (AP Photo/John Minchillo)

Leylah Fernandez displayed a champion’s poise after a memorable run to the US Open tennis final last summer, a performance that showed she had truly arrived on one of the sport’s biggest stages.

Mere moments after coming up just short of a Grand Slam title, the Canadian teenager delivered a speech that brought the house down at Arthur Ashe Stadium. Her eloquence wowed the New York crowd that day, just like the quality of her play over the preceding fortnight.

Fernandez’s upset-laden blitz through the women’s draw was one of the highlights in a breakout season for the Montreal native. She also earned her first career WTA Tour title in 2021 and surged up the world rankings to crack the top 25.

Fernandez capped her year Tuesday by winning the Bobbie Rosenfeld Award as The Canadian Press female athlete of the year.

An up-and-coming 73rd-ranked player entering the US Open, expectations were modest at the start of the tournament. Fernandez would wildly exceed them.

She stunned defending champion Naomi Osaka in the third round and knocked off more big names like Angelique Kerber, Elina Svitolina and Aryna Sabalenka en route to the final.

Fernandez thrilled the lively crowds along the way with her energy, spirit and determination. Fans were smitten and cheered the 19-year-old Canadian like a hometown favourite.

The final match, however, did not go her way as she fell to British qualifier Emma Raducanu.

It was an emotional afternoon in New York on the 20th anniversary of the 9/11 attacks. After an on-court interview, Fernandez asked for the microphone back before receiving the finalist trophy so she could address the crowd one last time.

“I know on this day it was especially hard for New York and everyone around the United States,” she said. “I just want to say that I hope I can be as strong and as resilient as New York has been the past 20 years.

“Thank you for always having my back, thank you for cheering for me. I love you New York and hope to see you next year.”

The applause from the over 23,000 spectators in attendance was deafening.

In addition to her first Grand Slam final appearance, Fernandez — who started the year ranked 88th in the world — won the Monterrey Open in March. She also helped Canada post a 4-0 win over Serbia in the Billie Jean King Cup playoffs in April.

The Rosenfeld race was a close one this year with Fernandez receiving 12 of 45 votes cast by sports editors, writers and broadcasters across Canada. Swimmers Penny Oleksiak and Maggie Mac Neil finished with 10 votes apiece.

“This award is going to be one of many she wins,” said Tennis Canada president Michael Downey. “We just are so proud of this young woman, both for what she did on court but also what she does off-court because her speech after she lost the (US Open) final was one for the ages.

Fernandez, who lives and trains in Boynton Beach, Fla., is the third tennis player to win the annual award in the last decade. Bianca Andreescu won it in 2019 and Eugenie Bouchard won it in 2013 and ’14.

“Leylah’s run through what is arguably the most difficult of the tennis majors — the US Open — was nothing short of remarkable,” said Kelowna Daily Courier managing editor David Trifunov.

“Her surgical cuts through the field of former champions and world No. 1s – all with what’s becoming her trademark dimpled smile _—is precisely the tonic Canadian sports fans needed in a pandemic.”

Fernandez finished the year with a 25-17 record and she earned US$1.77 million in prize money.

“I’m very honoured to be amongst these athletes who’ve done so much for women’s sports, and their respective sports, and even outside of their sports,” Fernandez said. “Growing up, I’ve read about (Sinclair) in the news.

“I’ve seen how much she’s accomplished and I’m honoured to have my name right beside hers.”

The winner of the Lionel Conacher Award, presented to CP’s male athlete of the year, will be announced Wednesday. The team of the year will be unveiled Thursday.

This report by The Canadian Press was first published Dec. 28, 2021. 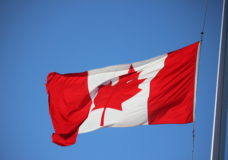 As of Dec. 27, Canada has recorded 2,026,399 cases of COVID-19
Curbside recycling collection cancelled Tuesday in Victoria due to weather