Tenants living in the Magdalena apartment building in North Cowichan are facing eviction.

The developer, WestUrban Developments, is applying to evict all residents to complete extensive renovations to the building.

“From day one it’s been a nightmare,” said Gordon Griffiths, who moved in the day the building opened in 2020.

On July 26, Griffiths received his notice from West Urban stating the company was applying to the Residential Tenancy Branch to proceed with the evictions.

“They have known for months that they were going to be doing a mass eviction. But they didn’t tell anybody,” Griffiths told CHEK News.

“We could have been out looking for places.”

Tenants say the problems started immediately with the new building, including flooding in many suites, cracks in walls and appliances that don’t work.

“Looks really nice on the outside. It’s new. But it doesn’t matter if it’s new and looks nice if nothing works,” said Siatecki.

The problems, according to the tenants, start in the basement. The developer blocked off the underground parking with little notice.

Tenant Carolyn Langley took a photo of the parking area showing many support posts in place of cars.

“If you go down there you see all the 13 spots,” said Langley.

Pete Robison said water problems are not only in the apartments, but in the hallways as well.

“We’re the only ones that haven’t been hit yet. Every other suite has had leaks, all throughout,” Robison explained.

North Cowichan Mayor Al Siebring said the work must go ahead but noted that tenants can stay until then.

“Once the renos get underway, for example, they have to shut off the sprinkler system. Because part of the problem is plumbing. And you cannot occupy a multi-unit building like that without a sprinkler system,” Siebring said.

If the Residential Tenancy Branch approves the evictions, the earliest the tenants will have to vacate the building is by April 1.

Luc Bender said tenants, himself included, are frustrated after months of problems.

With North Cowichan’s vacancy rate sitting at less than one per cent, the concern for tenants is finding a new place to live.

WestUrban did not respond to requests for an interview.

The Ministry of Housing issued a statement on the situation with the Magdalena: 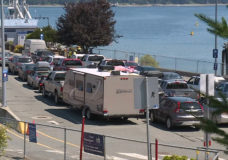 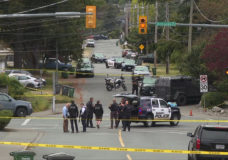