A snow day message from Scott Saywell Tuesday went viral, as he announced classes were closed that day because of the snowstorm earlier in the week.

But on Friday morning, the District 68 superintendent wrote a new song to the melody of “Hallelujah” by Canadian singer-songwriter Leonard Cohen.

As he strummed his guitar again, Saywell informed kids schools are open and buses are running.

“If you’re hoping there’s no school today, you could stay at home and play, well I’m sorry to have to break the news to you,” Saywell sang in his opening lines.

Saywell added a message for students who think it’s not fair that they have to head back to the classroom Friday.

“When I was a kid, I had long blonde hair. Well look at me now, well that’s not fair either.”

Nanaimo-Ladysmith and Qualicum District 69 schools are open Friday, while others are closed for Pro-D days on the Island.

Schools are open and buses are running ⁦@SD69Qualicum⁩ Drive carefully and enjoy your day. pic.twitter.com/K7g5pVSvtF

The blast of winter that brought a blanket of snow to the Island closed most schools in the areas hit with the white stuff for the first three days of the week.

The University of Victoria and Royal Roads are open, along with all campuses for Camosun College, North Island College and Vancouver Island University. 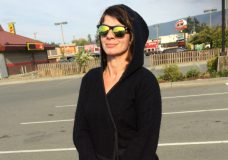