WATCH: Schools were closed from Greater Victoria to Campbell River Tuesday, as a second day of heavy snow blanketed much of the Island. As Skye Ryan reports, in Nanaimo-Ladysmith the new Superintendent of Schools snow day message went viral.

Scott Saywell is living his dream job as Superintendent of School District #68.

So just five months in, he decided to try something a little different in the bleak winter conditions.

“I wrote some quick lyrics and before I knew it we were videoing and off it went,” said the Nanaimo-Ladysmith Superintendent.

As the superintendent of schools for Nanaimo-Ladysmith, he ultimately made the call to cancel schools in the district.

But he decided to whip out his guitar, write some lyrics and deliver the snow day message with a Johnny Cash flair.

“And the snow keeps on coming. Can’t wait till it’s all gone,” he sang in the video posted to YouTube.

The video has since gone viral with 35,000 views since Monday night and counting.

“I didn’t expect that so that’s nice,” said Saywell.

Schools were closed across Vancouver Island Tuesday, from Greater Victoria to Tofino and up north to the Campbell River School District. Only the North Island School District was in.

This storm, setting records in more ways than one.

“I can’t recall that we’ve called two snow days in a row in fact,” said Saywell.

And with this snow continuing to fall Saywell says there could be more.

“So maybe a third if it keeps snowing like this. That’s pretty rare,” said Saywell.

So Saywell will keep his guitar at the ready, though he’d much rather prefer to be singing here comes the sun.

“Let’s hope for that,” said Saywell. 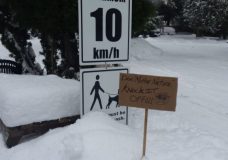 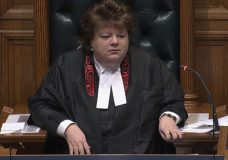