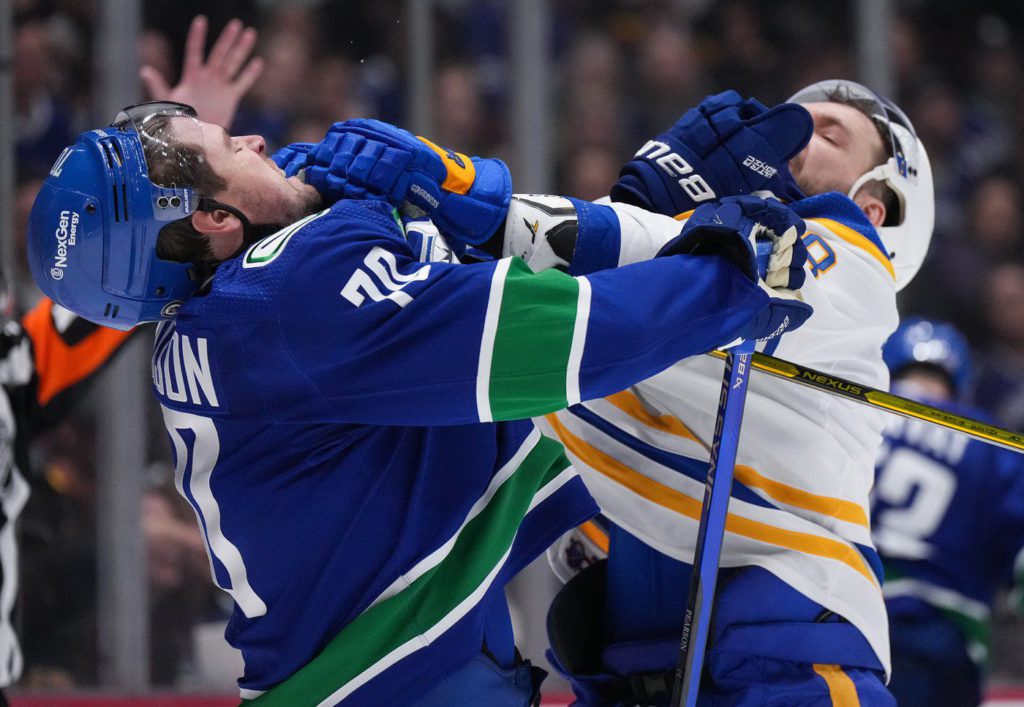 CHEK
Vancouver Canucks' Tanner Pearson, left, and Buffalo Sabres' Zemgus Girgensons, of Latvia, shove each other as they get into a scuffle during the third period of an NHL hockey game in Vancouver, on Saturday, October 22, 2022. THE CANADIAN PRESS/Darryl Dyck

Boos rained down on the Vancouver Canucks as they left the ice on Saturday.

Hopes had been high for the team’s first home game of the season, but with just minutes left on the clock and the Buffalo Sabres up, three jerseys were tossed on the ice and others in the disgruntled crowd expressed their displeasure with jeers.

“It was the first time I’ve ever been involved with that,” head coach Bruce Boudreau said after the Sabres handed his Canucks a 5-1 loss.

“And obviously I hope the players feel the same way I feel about it, it’s just totally embarrassing. It’s something you never want to see.”

Vancouver (0-4-2) has now lost six games in a row and are the lone team that has yet to register a win this NHL season.

“We haven’t won a hockey game yet. But we’re working,” he said. “We just have to be a lot better and we just have to put a full game together. … We’re confident in this group. We’re a really good hockey team. We just need to win games and get going here. It’s just been tough.”

The team’s confidence is high, said Rasmus Dahlin, who had a goal and an assist in the win.

“I think it starts from hard work and we really deserve this confidence we have right now,” he said. “We’re playing away games but we’re playing them really, really good and we’re really starting to find our game.”

Victor Olofsson put away two goals and an assist, while Alex Tuch and Zemgus Girgensons also scored for the Sabres. Casey Mittelstadt and Rasmus Asplund each contributed a pair of helpers.

Garland had the lone tally for the Canucks.

Vancouver’s Thatcher Demko stopped 21-of-27 shots and Craig Anderson made 29 saves for Buffalo.

Vancouver pulled Demko in favour of an extra attacker with less than four minutes to go and Girgensons put an easy shot into the yawning net at the 16:31 mark.

Fifty seconds later, Olofsson put a shot past the Canucks’ netminder for his second goal of the game.

The Sabres regained a two-goal advantage 1:54 into the third off a two-on-one.

Mittelstadt sliced a pass across the slot and Olofsson snapped a shot past Demko to make it 3-1.

“We were under a pretty good barrage in the second and (Anderson) and our group of defencemen, I thought played really well,” said Sabres coach Don Granato. “And the third we needed to get back to a little bit more of our game. We were able to do that early and (Mittelstadt) and (Olofsson) teamed up and that was a really big moment for us.”

Less than 30 seconds earlier, Vinnie Hinostroza briefly appeared to boost Buffalo’s lead. The goal light behind the Canucks’ net lit up after the veteran forward’s shot hit both posts and bounced out, but a video review showed the puck never crossed the line.

Vancouver got on the board midway through the second with a power-play marker after Dahlin was called for tripping.

Stationed in front of the Sabres’ net, Tanner Pearson sent a blind, spinning, backhand pass to Garland and the winger fired a wrist shot past Anderson from the low hash mark.

The goal cut the home side’s deficit to 2-1 and Garland celebrated with a massive fist pump.

Vancouver went 1-for-4 on the man advantage Saturday while Buffalo was 1-for-1.

The Sabres lost a defenceman about three minutes into the middle frame after Mattias Samuelsson hit Curtis Lazar along the end boards.

Samuelsson went down awkwardly after the contact and lay writhing on the ice, grabbing his right knee before a trainer came out to help him to the bench. He went directly to the Buffalo locker room and did not return.

A defensive lapse proved costly for the Canucks late in the first.

Oliver Ekman-Larsson gave away the puck in the slot and Tuch was there to pick it up and whip a shot under Demko’s arm to give the Sabres a 2-0 lead at the 15:18 mark.

Buffalo opened the scoring with an early power-play goal after Tyler Myers was called for tripping Tage Thompson.

Dahlin ripped a shot from inside the blue line and the puck hit Vancouver’s Elias Pettersson in the high slot before sailing in past Demko 5:35 into the game.

The No. 1 pick in the 2018 NHL entry draft, Dahlin has goals in five straight games and is the first-ever Sabres’ defenceman to accomplish the feat.

Dahlin is the first NHL defenceman to start a season with a five-game goal streak, but he’s not the only Sabres’ player putting up a string of points early in the campaign. Tuch is on a four-game goal streak with six points across the stretch.

Vancouver was missing three defencemen with various ailments, including Quinn Hughes (lower-body). The team called up Noah Juulsen from the American Hockey League’s Abbotsford Canucks earlier on Saturday and Jack Rathbone made his season debut.

The Canucks continue their homestand Monday when they host the Carolina Hurricanes. The Sabres visit the Kraken in Seattle on Tuesday. 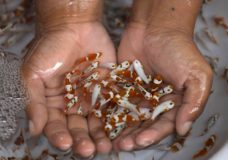 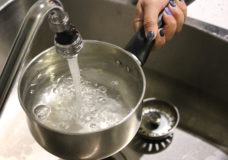