Posted: May. 28, 2020 6:00PM
CHEK
WatchA 100-pound gargoyle named Petey, which was stolen from its perch over a Nanaimo backyard, has now been returned to grateful owners.

“I was so surprised to see Petey back,” said gargoyle owner Shavauna Ronan.

Police and the family say thieves braved barbed wire, broke through a fence panel and snatched the grey concrete garden ornament from his backyard perch overlooking his Nanaimo home either Tuesday night or early Wednesday.

“And he was guarding the precipice of their house for years overlooking their yard,” said Const. Gary O’Brien, media relations officer with the Nanaimo RCMP.

“I was just shocked that someone decided to take a gargoyle off a deck,” said Ronan’s grandson Seth Bremner.

“Where would he go? Who would take a 100-pound gargoyle,” said Ronan.

“So when Petey went missing yeah I was sad because we’ve had him for 15 years. so I didn’t expect to get him back.”

But Petey is now back. A Nanaimo RCMP officer hand-delivered the 100 pound (45 kilogram), two-foot (61 centimetres) wide statue Thursday morning to his surprised owners.

“I’m just happy to have him back here, to have us be safe again,” said Bremner.

It’s still a mystery who took. He turned up with the help of a Good Samaritan, who was cleaning a homeless encampment downtown and saw the unexpected and a little bit scary face peering back at them.

O’Brien had a little fun Thursday when he explained how he was found.

“Thankfully as the legend goes it can give bad spirits,” said Const. O’Brien.

The family says they are overjoyed, thankful and hold no ill will to whoever took the gargoyle. 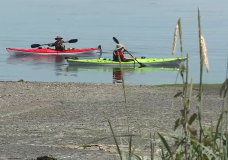 With only one active COVID-19 case should Vancouver Island welcome visitors this summer? 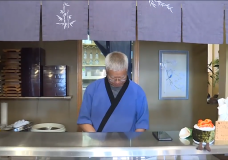