March 28, 2021 updated
CHEK
WatchAs COVID-19 cases surge across the province and the highest number of active cases hits the Island, experts warn things could get worse, as new variants could take hold as younger people flaunt the rules. Julian Kolsut has this story.

Island Health’s top doctor is warning that record-breaking and concerning COVID-19 numbers will get worse.

On Friday, health officials announced a record-setting 55 new cases of COVID-19 were identified on Vancouver Island.

Furthermore, there are 117 active cases were on southern Vancouver Island, the most ever recorded.

“We can say we will likely see significantly more numbers and variant cases on the Island,” said Stanwick. “As we see the number of contacts go up, at the time where there is a U.K. variant coming and [to] the Island, we are looking at what could be a much more challenging time for us going forward.”

One age group, in particular, is driving the spike in new cases.

According to a notice issued by Island Health, 47 per cent of cases recorded on Vancouver Island in the past week were in those between 20-39 years of age — a 60 per cent increase compared to the week before.

“It is crucial right now that we all follow public health orders, which means no indoor gatherings and sticking to the same group when outdoors,” Island Health said in a post on Instagram.

Fortunately, the number of hospitalizations on Vancouver Island remains low at 14, with only one in critical care, according to the BCCDC’s website.

But new variants could totally change the situation, experts say.

“I’ve come across them just this week, people who just broke 1 rule for 10 minutes and bingo they ended up in the hospital a week later,” said Dr. Wayne Ghesquiere, an infectious diseases and internal medicine specialist in Victoria.

“The new variants are more infectious, more pathogenic. You can get sicker from them. You don’t want to get it … There are hospitals for example in Ontario or in Quebec, where the intensive care’s don’t have elderly patients anymore, they have young individuals who are hospitalized, intubated,” he said.

Ghesquiere says after a long year, pandemic fatigue is driving many of the slip-ups, but that in the final sprint we need to stick with what we know.

“It’s not different than it’s been over the past year,” said he said.

“We need to do social distancing, and we need to wear our masks and the vaccine…. so we do all three layers and even new variants we will get a handle on.”

Experts say the outlook for the province looks difficult.

“We are in for a difficult couple of months,” said Caroline Colijn, Canada 150 Research Chair at Simon Fraser University. “Two more weeks, that’s almost four times as many times of variant cases, that’s going to be faster than when we can vaccinate everybody.” 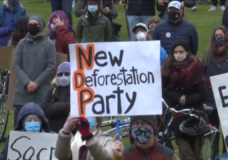