WATCH: The Soldiers of Odin are threatening to take action at Nanaimo’s tent city this weekend. A Facebook post by the far-right group says they will be “facilitating the removal of Discontent City this Sunday.” Kendall Hanson reports.

Despite ongoing court action, Nanaimo’s tent city is still standing strong after nearly three months, but a controversial right-wing group is vowing to change that.

In a Facebook post made early this morning, the Soldiers of Odin say due to what they call “continued inaction by authorities and reports of child sex trafficking” they plan to help “facilitate the removal of Discontent city this Sunday,” adding ominously, “we ask our friends supporters and general public to stay away from this area due to safety concerns.”

“My thoughts are this is just escalating out of control,” said Nanaimo’s Acting Mayor Gord Fuller.

“Don’t come up here with the intent of ripping something down,” said Fuller.

“Even though I disagree with the tent city. You don’t come up here with the intent of going in there and using violence to get anywhere.”

Fuller says detox beds, treatment and housing is necessary to help some leave the camp. He’s not in favour of the Soldiers of Odin trying to get involved.

“I’d prefer they don’t come down and that people maintain calm on both sides of this issue,” said Fuller.

But a camp spokesman says he’s not worried about Sunday after chatting with Soldiers of Odin earlier this week.

“I question the whole post because I’ve spoken with those members and like I said and I haven’t received any harsh words from them,” said Darcy Kory.

“Their whole agenda, they said, was to help us not to hurt us and I believe that to be true.”

Kory says he believes the post is just hype, and the last protest by the Soldiers of Odin actually proved to be positive for those at tent city.

“For the first time we came through these gates we had an outpouring of community support and donations. It was just amazing. It brought the people together more than anything,” said Kory.

Nanaimo RCMP say they’re aware of the post, and will be present Sunday to ensure public safety.

The Soldiers Vancouver Island Chapter president declined our request for an interview today. 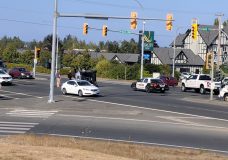 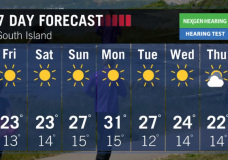 Ed's Forecast: Hazy conditions this weekend but the sun will get through occasionally