Shamrocks gear up for Game 2 tonight at Q Centre

After dropping Game One on the road Friday night, the Victoria Shamrocks look to even the series against the New Westminster Salmonbellies Sunday tonight at the Q Centre.

The Shamrocks credit a lack of intensity as to why they dropped the first game at Queens Park Arena.

“It was a bit of a weird game,” Shamrocks captain Corey Small says, “I don’t know if it was a feeling out game for both teams, but it didn’t seem like the intensity was as high as it should’ve been. I think on our part we can definitely kick that up a bit, bring some more energy to the game.”

While it’s only game two of this WLA Finals, the series feels like it has all the makings of going the distance, and the Shamrocks are ready if that’s the case.

“I challenged the guys before the playoffs started, to be ready to play 21 games, in a short amount of time,” Shamrocks head coach Bob Heyes says, “we’ve already played seven in the first round and we’ve got this one down, it could go five games, six games, seven games, we have to be mentally ready for that.”

“This series, we don’t expect to be any different from the last,” Small says, ” It’s up to us to win at home and then steal one over there so we’re focused on tonight, it’s going to be a good night for us with our fans here and playing at home. I think it could be a long [series] but hopefully, we’ll take it a little quicker than last time.” 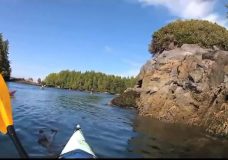