A man has been charged in connection with a fatal stabbing that took place outside of Victoria’s Lucky Bar earlier this month.

The attack occurred just before 1:30 a.m. outside of the popular bar in the 500-block of Yates Street. Police say that when they arrived at the scene, they found a man suffering life-threatening injuries who later died in hospital.

Family have since identified the victim online as 30-year-old John Dickinson, who had moved to Victoria from St. Catherine’s, Ont.

“My world changed that day, forever,” John’s sister Jasmine Bauer told CHEK News. “He was a clubber, he loved to go and dance and he loved to have fun…but he was not a fighter. He got along with everyone.”

Omar was arrested at around 2 a.m. and was taken into custody.

At the time of the stabbing, Omar was out on bail for charges including attempted murder, assault with a weapon, assault causing bodily harm, uttering threats to cause death or bodily harm and aggravated assault.

The charges were linked to a Feb. 6 stabbing on Lang Street in Victoria that left a victim with what police called “life-altering” injuries, with police saying one of those stab wounds was on the victim’s face.

Conditions of his release from custody included orders to not consume alcohol or drugs, not possess any weapon and abide by an 11 p.m. to 5 a.m. curfew.

“It brings into question the justice system,” said Bauer. “Because if they hadn’t released him on bail, my brother would still be alive.”

BC’s Prosecution Service told CHEK News in a statement that Crown Counsel and Omar’s defence counsel agreed on the terms of his release.

Meanwhile, the family was surprised to find out about the charges from CHEK News, and feel like they are being kept in the dark.

“We’ve had very little updates from the police department. We haven’t been kept up to date on anything, which is heartbreaking,” said Bauer.

Victoria Police was unable to respond to CHEK News before deadline.

Today’s second-degree murder charge, though, is offering John’s family a sliver of relief.

“I’m just thankful. Thankful that finally charges have been laid. It’s just been really hard with no news,” said Bauer.

Through a Go Fund Me John’s family managed to raise the money needed to get his body home to his mother on March 21st.

A celebration of life will be held in Ontario at a future date.

“It’s so hurtful to have him gone. He showed me what a true gentleman was. He is so loved and missed,” John’s girlfriend Aly Bitze told CHEK News in a statement.

“The world truly did lose a special human being that night on March 1st,” said Bauer.

Omar has remained in custody since the March 1 fatal stabbing and was expected to appear in court later Tuesday.

His first court appearance for the Feb. 6 assault will take place this Thursday.

None of the allegations against Omar have been proven or tested in court. 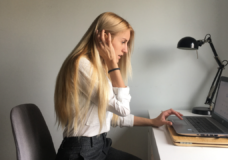