Update: Nanaimo RCMP says 75-year-old Julie Curling has been located and is safe

UPDATE: Nanaimo RCMP says 75-year-old Julie Curling has been found and is safe and sound.
Curling was reported missing by police before 9 a.m. Wednesday, about two and a half hours after she left her Cypress Street apartment and had not been heard from since.
Investigators said Curling has medical conditions that affect her memory.
Search and rescue were called in to help in the search.

Police seek witnesses of an assault in Courtenay in March 2007 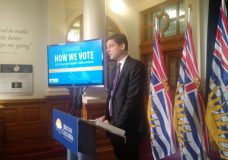