If you’ve driven along Comox Road by the Courtenay estuary you’ve likely seen the crude-looking fences in the water and wondered what they are all about.

For five years, the local K’omoks First Nation and a conservation group called Guardians of Mid-Island Estuaries have been using a traditional method of fishing, but for a different purpose altogether.

“We took the ancient technology of our fish traps down in the estuary here and made the fences in a way to where we just weave the willow through it and the geese can’t get in,” said Cory Frank, leader of the K’omoks Guardian Watchmen. “This is to protect the carex grasses and sedge beds and the fish habitat they create from the non-migratory Canada Geese that are here now.”

Canada Goose eggs were brought to the Island on purpose decades ago but the birds never became migratory and they’ve been eating important grasses in the Courtenay estuary and others ever since.

“I’ve been seeing this site here becoming denuded for decades now to tell you the truth,” added Frank. “It used to be 80 per cent grass now it’s only about 10 per cent This whole area here, (by the bird sanctuary viewing platform) there used to be a little stream and it was grass from here all the way up.”

WATCH: Get Up and Grow: What to do if your fish pond freezes over

Each piece of alder and willow is painstakingly weaved together to keep the geese out.

“We’ve learned that geese don’t like to be behind wood structures because they want a line of sight in case there’s an eagle or something that might be a predator to them,” said GoMIES Executive Director Tim Clermont.

About 1,000 geese from Comox to Deep Bay eat about a pound of greenery each day they’re in the area.

“It’s made a huge difference,” said Frank. “You’re looking at upwards of 200 tonnes of greenery that get eaten and not replaced and these sedge beds and banks can take decades to come back on their own.”

There are other benefits as well.

Major funding comes from the Pacific Salmon Foundation, Habitat Conservation Trust Foundation and BC Hydro’s Fish and Wildlife Conservation Program to the tune of $75,000 per year for each estuary. 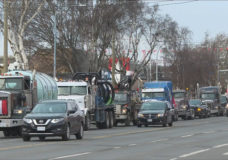 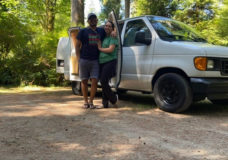 Nanaimo couple has stolen van returned thanks to community help