Nanaimo couple has stolen van returned thanks to community help

A stolen van, that was dear to a Nanaimo couple, has been recovered with help from social media and some observant residents.

Joshua Morales and girlfriend Rosa Juarez were shocked when they looked out their Nanaimo home early Sunday morning. Their van was gone from where it had been parked and another vehicle was there.

“My instinct was someone moved my van because someone moved in my spot and after I was realizing slowly that it’s gone for real,” said Morales.

This wasn’t just any van. Named Ellie, the couple had bought it and spent thousands fixing it up for a dream trip across Canada.

“It was our home. It wasn’t just a van. We lived in it for months while we were travelling the country. We built it together. We built it with my dad,” said Juarez.

They immediately reported the theft to police and posted about it on social media.

Then yesterday they saw a post about a person suspected of theft but it was the vehicle in the background that really caught their attention.

“We were like that’s our van. This person is using our van to commit other crimes,” said Juarez.

Fast forward to last night. Another Nanaimo resident spots something unusual while driving into the Walmart at Woodgrove Centre.

“This van was driving fast and erratically and it turned in and I thought that’s suspicious and then I realized I thought it was the van that I saw posted on Facebook that was stolen,” said Casey Spencer, a Nanaimo resident.

She snapped this photo and called the police who arrived soon after.

“They waited for the man to come back to the van and when he did they tried to block him in but unfortunately he sped away and nearly hit some people in the parking lot and they gave chase,” said Spencer.

Police say they weren’t able to pursue the vehicle because it was being driven dangerously but they found the vehicle dumped with stolen plates in Nanaimo’s north end, on Dublin Way, late Wednesday night. The stolen plates were from a vehicle on the West Shore.

The couple got to pick up Ellie on Thursday.

“I just can’t believe that anybody cared and we really really appreciate it,” said Juarez.

“I’m just happy that the people got their van back and you know we need to stay vigilant as a community and stand up for each other,” said Spencer.

Police are still looking for the suspect but the van’s recovery is a relief for the couple. 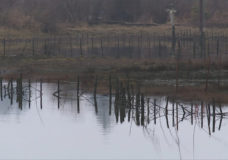 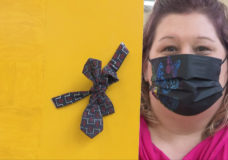