Santa stepped out of a BC Air Ambulance to as he visited Nanaimo’s hospital to deliver his unique kind of medicine.

“To tell them that Santa will not forget them over Christmas. No matter how sick they are, no matter how long they’re in hospital,” Santa told CHEK News, on his way into NRGH.

“It’s my favourite day of the year to get to fly Santa. It’s so special to be coming here bringing joy, instead of someone’s worst day,” said BC EHS Air Ambulance and Helijet pilot, Bree Stotts, who flew Santa in.

Inside the hospital, Santa met patients from new babies, to brave youngsters and their worried parents.

The event marked the 17th year that Helijet and BC Emergency Health Services had joined forces to bring the magic of Santa to B.C.’s sickest kids. The Santa Toy Flight had to go virtual in 2020 due to COVID-19 restrictions but Monday made its return to the halls of pediatric units, to the surprise of patients.

“Frequently they’re absolutely thunderstruck, as a matter of fact, I don’t think it matters if they are adults or children. We seem to have a very similar effect on all the people so it’s quite delightful,” said Santa.

“It’s always so nice and you see staff, kids, parents. They all react as soon as they see him, like oh Santa’s here,” said Trina Knight, child, youth and family manager at NRGH.

By the end of the day, Santa stopped into six B.C. hospitals, handing out toys, and a generous dose of hope that may have been even more needed. 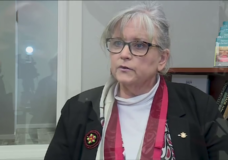 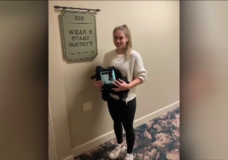