For Lauren Roworth, leggings are a constant feature in her wardrobe.

“It’s what I live in and I feel everyone should have a good pair of leggings,” says Roworth.

The Lambrick Park Secondary School student is in her grad year and is required to complete a capstone project in order to graduate.

“We’re supposed to do something that aligns with our future career goals or that’s tied to something we’re interested in,” says Roworth.

“I wanted to do something that helps my community, more specifically women.”

So Roworth teamed up with the Wear 2 Start Society, an organization that helps unemployed or newly employed women needing work wardrobes.

“They come in here and we have volunteers who act as stylists and put together outfits for them,” says past president Angela Mangiacasale.

“I like to say that it’s not really about the clothes, because by the time the women leave it’s like they’re five inches taller.”

After a few months of planning the Leg Up 4 Women fundraiser was born in an effort to provide much-needed leggings to the society.

As an athlete, I wear leggings every day, so as soon as Angela told me that they needed leggings I was sold.”

The fundraiser has been a huge success, with total donations approaching $8,000 in addition to garnering awareness for the society.

“We’ve been around 20 years but I’m often surprised by how many people have never heard of us,” says Mangiacasale.

“Lauren has tapped into the community to get the word out and to help raise funds which is awesome.”

“I feel like I’m doing something huge for the community,” says Roworth.

“It makes myself feel really good and I love being a part of this and helping as much as I can.”

To donate to the Leg Up 4 Women fundraiser, visit Roworth’s GoFundMe page. 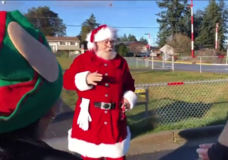