Bird watchers were drawn to a Metchosin field Friday after more than two dozen sandhill cranes were spotted.

“It’s amazing, I’ve seen them in Texas of all places, but not here,” said bird watcher Tom Austin.

While many local birds are feeling the effects of the smoke and keeping out of sight, the hazy skies are also bringing in an unlikely visitor to Vancouver Island.

Known for their unusual call and crimson caps, sandhill cranes are migratory birds and experts say the ones seen here on the Island are likely heading from Northern B.C. down to the southern United States or Mexico. But they don’t usually make stopovers in such large numbers on the West Coast.

“They have their habits and they know where they would normally stop where it would be safe and where food is available, but if they’ve had to take a detour, they’re just like us when we have to take a detour – we don’t know the right places to go, the right places to stop, and the same thing happens with the birds,” said Ann Nightingale with the Rocky Point Bird Observatory.

When heavy smoke rolled across the province earlier this week, Nightingale says many migratory birds, including the cranes, likely found themselves in trouble and sought the safety of low lying land.

“When we’re getting direction from health officials saying don’t overexert yourself, imagine trying to fly 300 miles in a night, that’s exertion,” Nightingale said.

With the smoke finally starting to clear on Friday, Nightingale says there’s a good chance the flock will take flight soon and continue its journey down south. 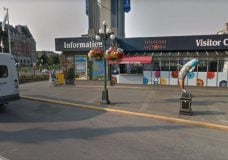 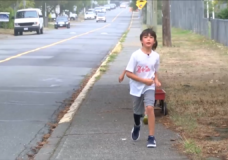 CHEK Upside: Meet the 9-year-old Esquimalt boy who wants to be Terry Fox