With border restrictions still in place, it appears sailings between Vancouver Island and Anacortes, Wash. will not be happening this summer.

Washington State Ferries has extended its suspension of sailings on its Sidney-Friday Harbor-Anacortes route for the summer and likely the year due to COVID-19.

“There is no service and there won’t be probably this year or at least, through the summer season. Until that border reopens, there won’t be any service,” Ian Sterling, a spokesperson with Washington State Ferries, told CHEK News on Sunday.

Sailings between Sidney and Washington State have been suspended since last March when a ban on non-essential travel between Canada and the United States was implemented as a result of the ongoing pandemic.

Even if the border reopens later this year, Sterling said that doesn’t necessarily guarantee sailings on the route will restart right away.

“It takes us a while to ramp back up,” he said.

Washington State Ferries has traditionally operated sailings on its Sidney-Friday Harbor-Anacortes route during the spring, summer, and fall months and should continue to do so once the border reopens.

“At this point in time, the plan is to continue service to Sidney, B.C. at least for the foreseeable future,” said Sterling.

Overall ridership on Washington State Ferries was down more than 40 per cent last year due to COVID-19, with the Sidney-Anacortes route seeing a 99 per cent drop in ridership due to the current border restrictions — the most of any route.

The Sidney-Anacortes route also had the lowest ridership numbers in 2019, according to the state’s Department of Transportation, and lawmakers have mulled privatizing the route in a bid to save money.

However, Sterling said the Sidney-Friday Harbor-Anacortes route has historically been a moneymaker for the publically-funded ferry company.

“That is a very popular route,” he said. “It makes money most of the time. In the spring and fall not so much, but certainly, in the summer months it does.”

Other sailings from Anacortes to destinations in the San Juan Islands were nearly at their regular ridership levels during the summer last year, according to Sterling, who expects the Sidney route to do well whenever the suspension is lifted.

“There is a lot of pent-up travel demand . . . and we expect to see a bump in the numbers,” he said. 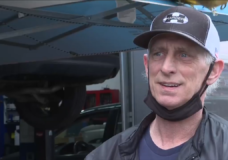 Dog rescued from shaft under back porch in White Rock, B.C.