WATCH: The location is new, but the people are the same. It’s called Camp Namgegans, set up by residents of Saanich’s former tent city, who still have nowhere to live. Today, its members called on all levels of government to address the housing crisis after only six campers were given housing last week. Kori Sidaway reports.

With no home to go to, some 40 people have pitched tents on Ravine Way after their home of five months was shut down.

The tent city at Regina park, Camp Namegans, was shut down by a B.C. Supreme Court injunction earlier this week, and only six of the 115 campers were able to find housing.

The rest had no housing in place, say they were forced to set up camp again. But organizers say this time it will be a bit different.

Around 40 people with Namegans Nation have landed on what they say is province-owned land, a decision that organizers say was intentional to avoid municipal bylaws, but also to bring the issue of affordable housing a step higher.

“On a nation to nation level, we invite the prime minister and the premier, and the mayor of Saanich to come sit at our table,” said Brett.

And although settled at Ravine Way and Carey Road just north of Uptown Mall for now, this is the last place tent city residents want to be.

“This is really hard. It’s cold, it’s damp, it’s wet. It’s ridiculous that this is what Canada has come to,” said Brett.

Saanich’s tent city campers are anticipating some sort of trespass notice in the days to come. But if housing isn’t made available, the nation is ready to stay in 100 parks over 100 days as part of their protest.

“Could you imagine our move every day for the next hundred days and how much police resources would be put into that? I’d much rather see that money going into housing,” said Brett.

In the meantime, founder Chrissy Brett says the new camp will be set up to better comply with fire bylaws. Then, they’ll wait. 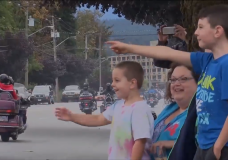