October 23, 2020 updated
Chek
WatchA Saanich couple hit an unexpected hiccup after a bylaw that could have them on the hook for more than $300,000, which they say they can't afford.

Michelle and Simon Gowing map out the plans for their new Saanich house.

They bought the property in August and initially planned to renovate it. They completed the proper inspections and structural safety checks before buying, but after tearing up the floorboards, they found a cracked foundation, something not found in their inspection.

They decided to start from scratch and knock the original home down, but that’s when everything took a turn.

“We had all of our plans, our architect’s designed, we’d spoken with the municipality. We were ready to submit for the building permit and the demolition permit and at that point, when we did do those submissions, that’s when we were flagged,” Michelle said.

The property isn’t connected to Saanich’s storm drain system and under Saanich rules, any new build has to be connected.

For the Gowings, that means ripping up 250 metres of road, paying for engineers to plan it, and paying for the construction workers. All of that would most likely cost more than $300,000.

The couple says they simply cannot afford the hefty price tag, and if they cannot find an alternative option, they’ll have to sell.

“You can’t borrow money and you can’t get a mortgage on infrastructure that you don’t have, so that is the unfortunate wall and hard place that we’re in,” said Simon.

“If you were a developer or a large company or planning to build apartment blocks, okay fine, I understand that, but for a single-family home and a single family that is doing it themselves, where is the logistics, and common sense in that?” questioned Michelle.

Saanich Mayor Fred Haynes says it’s about safety and says without that connection to the storm drain, there could flooding.

As for the couple, they say they were well aware of the rules, but say Saanich staff told them there would be alternate options.

“The homeowners say they have an alternate plan which includes rock pits and storage chambers, which they believe is adequate, but our staff on the technical side have some doubts about that because, in the long term, rock pits etcetera. If poorly maintained, can fail,” said Haynes.

But Simon says the plan was approved by multiple engineers and is more eco-friendly than pumping the water into the ocean from the storm drains.

“We are proposing a sustainable drainage system, which is a rock pit,” said Simon. “We have it designed and engineered by a professional engineer and we’ve doubled the size of its capacity to give a 100 perfect factor of safety, that would collect water from the entire property.”

Haynes agrees, $300,000 for one family is a lot, and usually this rule pertains more for subdivisions and large developments but admits this is a unique situation.

“We have an amazing couple, who wished to rebuild in Saanich and I have compassion for the couple, we but we have to be aware of the long term management. The problem here is that they’re quite a ways away from the main stormwater trunk line, often it’s much closer, and the cost is nothing like that,” said the mayor.

For now, the two sides are at an impasse, and the couple’s next move is to take their designs to council, to see if they can get them approved, without tearing up the street, something the mayor says he’s open to. 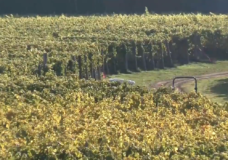 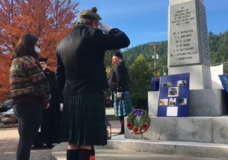