WATCH: A male black bear believed to be the same bear that swam in front of a B.C. ferry on May 18 is now roaming a neighbourhood above Departure Bay prompting conservation officers to warn residents to keep their garbage inside.

Peter Ternowski lives in the Glen Oaks Drive area above Departure Bay and for the last few days, he’s been keeping his garbage and compost bins inside.

“I keep it in the garage and I’ve told a couple of neighbours that they should do it too,” said Ternowski.

“It is unusual for bears to be here,” said Officer Stuart Bates. “We’re really trying to get the message out to the residents in the area if you butt up to any green space anywhere near Linley Valley assume there’s a bear there. You have to secure your attractants such as a garbage and bird seed.”

He says it’s likely the same bear that recently slowed down a B.C. ferry as it swam across to Newcastle Island.

Many of the residents in Ternowski’s neighborhood are keeping their garbage and compost outside because they haven’t had to worry about bears before, but Officer Bates says if the bear gets one taste of garbage, compost or bird seed, it could be its last.

“If the bear is allowed to start to access garbage and bird seed then its behaviour would escalate to the point where it could have to be removed,” said Bates.

“The conservation officer told me that the moment he breaks into one of those garbage cans they have to shoot him,” added Ternowski.

And it happened just two days ago in the Jingle Pot area after a bear got into the garbage in someone’s carport.

“And the very next day just a few doors down it was attempting to get in the back door of someone’s house while the person was in the house so unfortunately, we had to put that bear down,” said Bates.

Warning signs went up at the Oliver Woods Community Centre this morning after a young bear was seen in the parking lot.

The centre is also in the Linley Valley area. 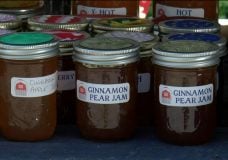 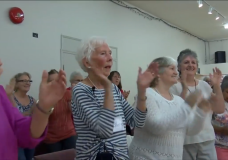