WATCH: A University of British Columbia (UBC) student is hoping her research project can shed more light on the causes of human and bear conflicts. She’s placing cameras in urban, rural and forested areas of Sooke to study the animal’s behaviour and find ways to cut down on conflicts with us. Luisa Alvarez reports.

UBC master’s student Joanna van Bommel has to choose where the cameras for bears go by looking for animal trails away from humans.

“Often the trails we find are initially deer trails but they create a pretty good track and then the bears tend to go along those,” says van Bommel.

She says the ideal area is off the beaten path with clear indications that animals have been there.

“You can see a pile of deer skat so that lets us know that for sure deer are walking along here and that increases the chances that something like a bear might be as well,” says van Bommel.

Once the motion-activated camera is set up, still photographs will be taken for an entire year and the data captured will let them know if and how many bears are in that zone.

“If we know where the bears are and we can compare that to the number of conflicts people are experiencing, we might be able to tease apart if conflicts are proportional, more bears equal more problems or if it’s just a couple of bears causing the problems,” said van Bommel.

The research project is in partnership with the province and National Geographic, as well as a grant. Together, they helped provide the 55 cameras that were set up around Sooke in wild, rural, and urban regions.

“Sooke has over three times as many calls as any other municipality so there’s something about it whether it be the fact that geographically it’s closer to kind of the wild part of the island to the west or something else about the area that makes it a hot spot for bear conflicts.”

Van Bommel is also working with private landowners to identify the best areas for the cameras to be installed.

“They’ve given me a wealth of knowledge about where they see bears and the patterns that they’ve seen over the years with conflict with the bears and its been really invaluable,” said van Bommel.

Finding out where the bears frequent and how that changes over the course of the year may help policymakers better implement mitigation strategies.

Co-op student with British Columbia conservation foundation Paige Monteiro says it’s important to recognize bears were here first and that’s why the project is so important.

“This study helps us understand where the bears are, so we can avoid having human conflicts and having to kill or relocate them,” said Monteiro. 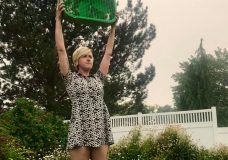 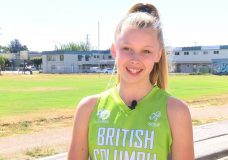