Rescuers pull together to save horse from Courtenay cliff

The heroic, quick thinking actions of neighbours and Search and Rescue members in the Comox Valley are being credited with saving a horse’s life there in an incredible effort.

The young stallion fell down a 60 foot cliff Friday night and in a first of its kind rescue effort that was all caught on camera, dozens dug in their heels to help.

There’s a bond now between Gary Hunt and his horse that only the story you’re about to read can really explain.

“It was truly amazing like oh it can’t be real it’s a Disney movie,” says Hunt.

How a team of volunteers and neighbours and the man who calls him his “baby” did the unimaginable, pulling the young stallion up a 60 foot cliff he’d fallen to the bottom of and the horse let them, without any struggle.

“It was amazing the amount of people that just showed up we had people here that we didn’t even know,” says Garry Hunt.

“Yeah Certainly there was lots of concern from everyone involved but he’s a tough young stallion and he’s lived to play another day,” says Paul Berry of Comox Valley Ground Search and Rescue.

After realizing the young horse hadn’t shown up with his herd for dinner Friday night, Garry Hunt immediately went out looking and found him in trouble.

“Found Duster under the waterfall,” says Hunt. “Basically a 60 foot drop, straight down.”

He’d fallen to the bottom of a massive fenced off cliff at the back of the family’s 40 acre Courtenay property. First Hunt wondered how he’d got there and survived, then how in the world the horse could be saved.

RCMP, search and rescue and neighbours answered the call with a make shift sling made of ropes, as Hunt reassured the young stallion they were going to save him.

“Just everybody it was amazing,” says Hunt.

“Really, really epitomized the sense of team and community that our team and many teams across the province have,” says Berry.

And remarkably the young Stallion emerged with barely a scratch on him.
After a a team of willing hands in the Comox Valley pulled off a first of a kind rescue, to save him.

“That’s one tough horse,” says Berry.
That Garry Hunt is grateful to have back home.

“Kind of gives you perspective of what the Island is really like and true friends when you need them,” says Hunt. 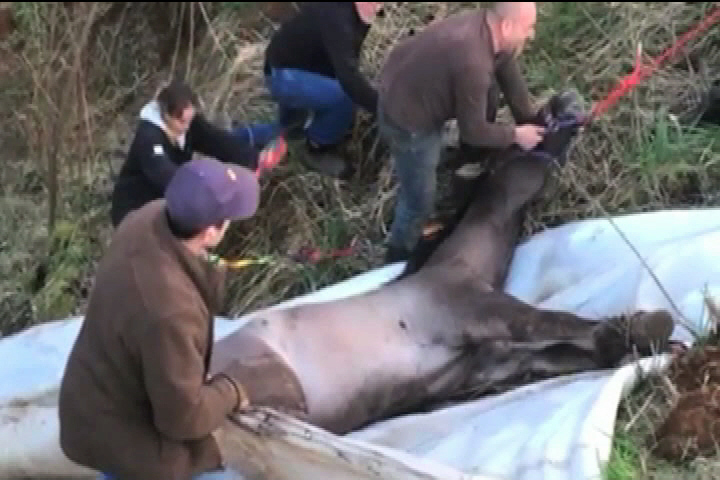 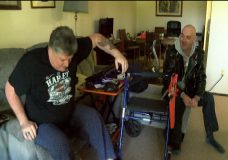 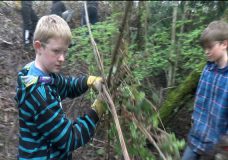