It’s a rare sight that’s leaving whale experts raising their eyebrows and scratching their heads — a lone beluga whale has been spotted swimming around Puget Sound, located near Tacoma and Seattle, Washington this week.

The white mammal has been seen swimming in the area several times throughout the week and no one really knows why.

“It’s almost never happened before. Although we might assume this beluga whale must have crossed Canadian waters to come all the way here, we in Canada have never seen any on this coast,” said Thomas Doniol-Valcroze, a research scientist and the head of Fisheries and Oceans Canada’s cetacean research program.

“Beluga whales usually live in the Arctic, so fairly far from here,” he continued.

He said little is known about the beluga whale: whether it’s a male or female, where it came from, which group it belongs to or why it wandered away from its family.

Experts are now trying to study it and figure out where it came from, which may prove challenging.

“Unlike humpback whales or killer whales, beluga whales, not all of them have enough markings on their body to recognize individuals,” explained Doniol-Valcroze.

He suspects the beluga whale is likely from Alaska’s Cook Inlet where an endangered group of belugas live.

While the sighting is extremely rare, it’s not the only time people have seen the species wandering around the west coast.

One beluga whale was spotted last year in San Diego and another around Washington state in 1940, according to Doniol-Valcroze.

He explained that despite the animal being isolated, we shouldn’t worry as it might not be in danger.

“It’s not necessarily a sign they’re in distress. Some of them are very healthy and don’t run into trouble, but it can be worrisome because sometimes it will expose them to environments they’re not used to,” he explained.

“They could be facing dangers, predators or conflict with human activities that they wouldn’t necessarily have in their original place,” Doniol-Valcroze said.

As researchers continue trying to match the whale to its appropriate family and location, anyone who sees any beluga whales is asked to document from afar, not to interact with the animals and contact Fisheries and Oceans Canada. 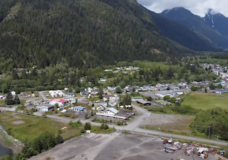 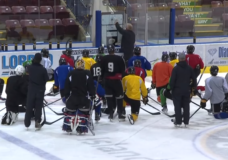