Rainfall warning, flood watch in effect for most of Vancouver Island

Environment Canada has issued a rainfall warning and the Ministry of Forests has issued a flood watch for most of the Island.

The rainfall warning has been issued for east, inland, and west Vancouver Island and is in effect until the early afternoon, as between 50 millimetres and 125 mm is forecast for the Island.

The flood watch is in effect for west, central, east, south, and Englishman River. North Vancouver Island is under a High Streamflow Advisory.

The warning for the east part is in effect from Courtenay to Campbell River, Duncan to Nanaimo and Nanoose Bay to Fanny Bay. Rainfall in these areas is predicted to be up to 50 mm, except up to 90 mm between Qualicum Beach and Fanny Bay. It is also expected to have strong southeast winds of 50 km/h gusting to 70.

I am on the weather watch again today. Snow and ice have turned to heavy rain across the island today. This is 14th and Cedar, underwater in #CampbellRiver. How is the weather where you are? Message me your photo and videos. #bcstorm @CHEK_News pic.twitter.com/F2Oqh16ycF

Inland Vancouver Island is predicted to receive up to 100 mm of rain.

West Vancouver Island is expected to receive up to 125 mm of rain and strong southeast winds of 70 km/h gusting to 90.

This rainfall is being brought in by a Pacific frontal system.

“Heavy downpours can cause flash floods and water pooling on roads,” Environment Canada says in a statement on its website. “Localized flooding in low-lying areas is possible.”

This rainfall comes after the Island has been experiencing higher levels of snowfall, and a freezing rain storm on Dec. 23.

The River Forecast Centre says the significant rainfall may result in low lying flooding in areas.

“Low lying flooding is expected and may extend to overbank flooding of floodplains in areas,” the flood watch notice says.”Snowmelt at lower elevations is also anticipated to cause pooling and flooding in areas with poor drainage or where drainage structures are impacted by snow and ice. Rising streamflow is expected through Saturday and in areas overnight to Sunday.” 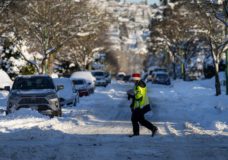 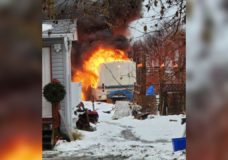