The former ferry, Queen of Burnaby, arrived in Union Bay this past week and now numerous area residents are concerned the vessel may be pulled apart locally.

The former BC Ferries ship sailed between Comox and Powell River before being decommissioned in 2017.

Now the vessel is back in local waters and BC Ferries says that’s where she’s temporarily being moored.

“We have not yet sold it and we’re planning to recycle the ship here in British Columbia as soon as we can conclude terms with a certified recycling company,” said Mark Collins, BC Ferries President and CEO.

BC Ferries confirms it had an offer on the ship in 2018 but the terms did not conclude.

Area residents are worried it may be purchased and disassembled at the relatively new shipwrecking facility in Union Bay where it’s moored, adding it’s a hazardous industry to the environmentally-sensitive area.

“We are very concerned about the environment. Our families swim in these waters and we really believe the government needs to step up and their number one job should be environment and safety,” said Rob Kerr, an area resident.

“The research I’ve done in talking with accredited ship breaking facilities is everything is contained so a ship would come in. It would be lifted. It would be put into a dry dock or a containment barge so anything that comes off that vessel can go straight into containment,” said Ray John, another concerned area resident.

The Comox Valley Regional District says it’s been working with the operator to ensure it’s using the land properly.

“It doesn’t appear that this fits the marine industrial zone the way it was written so we’re encouraging the operator to work with us on a rezoning application or a temporary-use permit,” said Daniel Arbour, Chair of the Comox Valley Regional District Board.

The company says 99.8 to 99.9 per cent of ships are recyclable and there are strong environmental rules regulating what they do.

“We have a very very stringent environmental plan. All the hydrocarbons need to be removed before the vessels come in here. The barges obviously don’t have anything on them,” said Mark Jurisich, the Manager of Deep Water Recovery in Union Bay.

Jurisich said there is demand for shipwrecking as North American companies are no longer allowed to send their ships to developing countries to be pulled apart for lack of environmental controls and poor wages.

BC Ferries says it will do background checks to ensure any buyers of the Queen of Burnaby will recycle it properly. 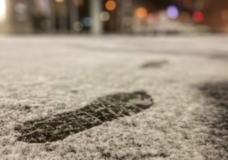 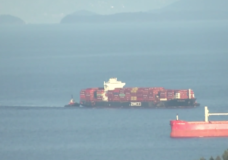