The televised broadcast, which was pre-recorded, aired on CHEK News at 12 p.m.

During a speech that lasted about five minutes, Queen Elizabeth talked about the ongoing coronavirus pandemic and thanked health care workers and other important workers in the United Kingdom.

She also said it was important for everyone to remain united in the battle against COVID-19.

“Together we are tackling this disease and I want to reassure you that if we remain united and resolute, then we will overcome it,” said the Queen.

The United Kingdom has faced challenges before, but the coronavirus is not like the others, explained the Queen.

“This one is different,” she said. “This time we join with all nations across the globe in a common endeavour using the great advances of science and our instinctive compassion to heal.”

The Queen also touched on the separation that many people around the world are dealing with at the moment. She said many people will feel a “painful sense of separation” from their loved ones but that it is the best course of action right now.

“We know deep down, that it is the right thing to do,” she said.

The Queen ended her broadcast with a message of hope and optimism.

Prior to today’s broadcast, Queen Elizabeth had only given four other broadcasts during her 68-year reign, with the last one coming in 2012. 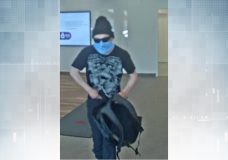