Posted: Jul. 2, 2017 6:39PM | Last Updated: Jul. 3, 2017 10:06AM
CHEK
A controversy is swirling in Qualicum Beach that has residents and the town’s mayor pledging to pay the fines a 79-year-old man is facing there. Skye Ryan reports.
Barrie Burden is so proud to be Canadian he’s put up flags front and back of his home, but his strata council says it’s against the rules and they’re fining him for doing it.
In raising his Canadian flags over his Qualicum Beach home, Barry Burden is saluting his children and grandchildren who are serving in our armed forces. “I think I have the right to put the flag up and show it,” Burden said.
So at 79-years-old on Canada’s 150th Birthday weekend, not even fines are stopping him from doing it. “I’ve developed a love for my country I didn’t think was there,” Burden sai.d
“It’s there now.”
The trouble is his strata council won’t allow his public display. They issued an email to him just before Canada Day, telling him he is breaking the bylaws of the quiet patio home complex he lives in and must remove the flags and pay a $50 fine from here and for every week they stay up.
“They are fining me now, and will until weekly until I take it down,” he said.
In issuing Burden that $50 fine, the strata has sparked a rebellious streak in his evidently very patriotic senior’s complex. Neighbour after neighbour of the 79-year-old has put up flags now outside their homes.
“Yeah we definitely wanted to show him that we agree,” his neighbour Linda Montgomery said. “That yeah the Canadian flag should be flown everywhere and anywhere, at any time.”
“And I’ve got some phone calls from strangers offering to pay this and emails,” Burden said. “You know I couldn’t believe it.”
One of the calls was from Qualicum Beach’s mayor.
“I wouldn’t take it down,” Qualicum Beach Mayor Teunis Westbroek said.
“Like I said I’ll give him 50 bucks to pay the fine for at least a week and keep it going and I think other people would feel the same way. “
Qualicum just hosted its biggest Canada Day celebration ever. Thousands filled the downtown Saturday, shoulder to shoulder to show their patriotism.
“And sometimes you need to draw attention to something that could be perceived as a little bit negative to see the strength of the community rise to the top,” Westbroek said.
“And as you said more and more people are now putting flags up and saying wow we gotta show our pride in our country and in our maple leaf as well.”
A reaction that has made Burden proud.  “I felt that. I saw that,” says Burden. “The participation is going to grow every year. I hope it’s year round soon. “
The strata that are fining Burden didn’t return our call for comment, as the Qualicum man considers the cost he’ll have to pay to fly flags outside his home. 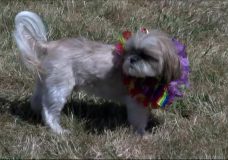 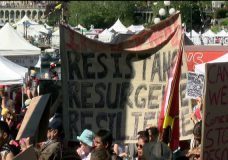