Gowlland Harbour is a beautiful area on the west side of Quadra Island.

But now a sunken barge is at the least an eyesore for those who live near it.

“The pilings right now are tipping, I mean if there was a bad storm the whole thing would break loose,” said Monica Millar who lives nearby.

The barge sank on Friday after previous attempts to right it when it began listing the other way.

Millar arrived home to her cabin on the property Friday afternoon to find numerous emergency vehicles.

“The fire department, police and the Coast Guard all showed up,” said Millar.

Locals say the barge has been there for a couple of years since it was saved in a storm by the Seascape Resort’s owner at the time, who pulled it to shore.

CHEK News has been told the barge’s owner has apparently washed his hands of the floating accommodation, claiming bankruptcy.

“They were breaking all kinds of laws as far as the Regional District was concerned,” said Area C Director Jim Abram.

But the Regional District couldn’t get anyone to move the barge so the Ministry of Forests, Lands, Natural Resource Operations and Rural Development put a notice on the barge in mid-August saying the owner had a month to move it. Then it sank.

“The Coast Guard has gone over and assessed it and said well it’s touching the bottom but it’s not leaking anything so we’re out of here. So I don’t think they’re going to take responsibility which I don’t think is their responsibility but it’s somebody’s you know, it’s certainly not ours,” added Abram.

In an email late this afternoon the forests ministry says it’s not its responsibility either, leaving it now the hands of a convoluted and changing ownership of the Seascape Resort and the barge’s owner. 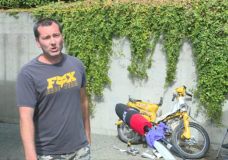 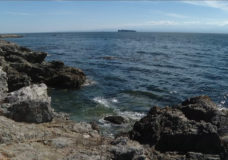