Posted: Sep. 8, 2021 6:20PM
CHEK
Watch The University of Victoria working with Ocean Networks Canada is trying to reverse the effects of carbon emissions by turning CO2 into rock. A similar experiment has been done before, on land. But, the researchers here are using our ocean-side location to their advantage. Hannah Lepine has more.

Off the shores of Vancouver Island, a negative emissions technology is in development.

‘Solid Carbon’, a project by Ocean Networks Canada and partner Columbia University is aimed to slow down the consequences of climate change.

“Pull CO2 out of the atmosphere, pump it through the water column into the subfloor basalt,” says Kate Moran the President and chief executive officer of Ocean Networks Canada.

Basalt is a hard, volcanic rock found all over the world but especially under the ocean.

The project is similar to experiments being done in places like Iceland, proving CO2, once injected into the basalt, reacts and turns to rock.

But, the uniqueness about the experiment happening here is that it’s being done in the ocean — where 90 per cent of the planet’s basalt is found.

“We have ocean observatories off our coast but in a very special place called Cascadia Basin,” adds Moran.

On the Juan De Fuca plate, stretching from Northern Vancouver Island all the way to Cape Mendocino in Northern California.

“This basin alone can store over 25 years of what we’ve already put into the atmosphere, just this basin off our coast,” says Moran. “Much of the pacific ocean is rimmed with this very similar type of ocean basalt,” she adds.

The University of Calgary is also a part of the project, scientists there have demonstrated that gigaton-scale carbon dioxide storage is possible when plumes of CO2 are directly injected into deep ocean basalt.

“Human activity adds about 51 billion tons or gigatons of greenhouse gases to the atmosphere each year that essentially we need to be injecting on the order of a gigaton or billion tons of CO2 into the basalt oceanic crust each year,” says Dr. Benjamin Tutolo, an associate professor at the University of Calgary.

Agreeing that this strategy, over Iceland’s, is more scale-able.

“We can put more CO2 out of the atmosphere underground, or the water, quicker in this technology,” adds Tutolo.

The project requires a demonstration in order to prove its success, that’s expected to take place by 2024. 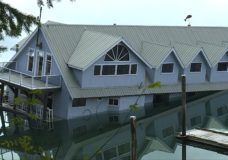 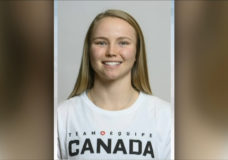