Starting at 2 p.m. dozens of activists occupied the intersection at Mount Newton Cross Road and Highway 17 in protest of a pipeline that is planned to be built through Wet’suwet’en territory in northern B.C.

“What the Trudeau government and our own premier John Horgan have fed us is lie after lie and turned around and said these dam Indians are to blame,” Brian Sampson, a spokesperson at the blockade said.

“Hunting territories and homelands reduced to a third, timber companies feel they have the right to gate it off and call us trespassers, hostile fish and game, uncles held at gunpoint over fish.”

Sampson said he and other Indigenous people “are still here and will continue to fight.”

Pat Bay Highway blocked in both directions by Wet'su'weten supporters. They're at Mt. Newtown but #yyjtraffic is being diverted ahead of the blockade. Live reports @CHEK_News CHEK New at 5 & 6 pm and go to https://t.co/s70rCoa7uM for the latest info. #yyj #bcnews #Wetsuweten pic.twitter.com/4OyS8ilSD3

Drive BC had an alert on their website stating a significant traffic disruption due to “a civil action occurring between Exit 19: Island View Road and Exit 21: Mt. Newton Cross Road (Central Saanich).

Traffic was being rerouted by police around the area, with southbound traffic detouring at Amity Road and northbound at Island View Road, The turn onto East Saanich Road is closed by police. 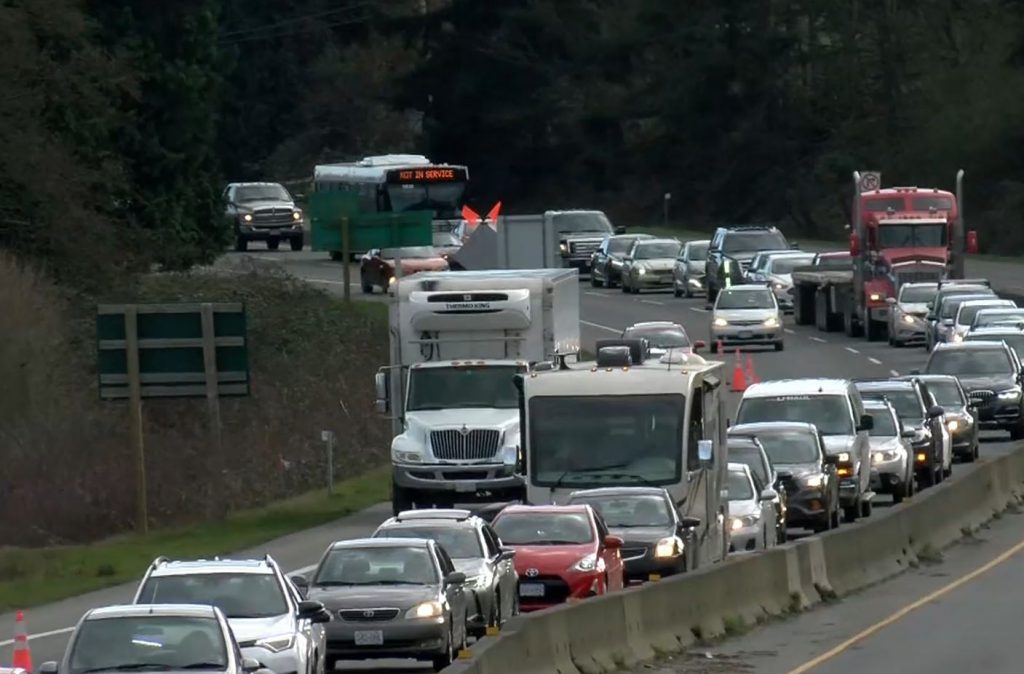 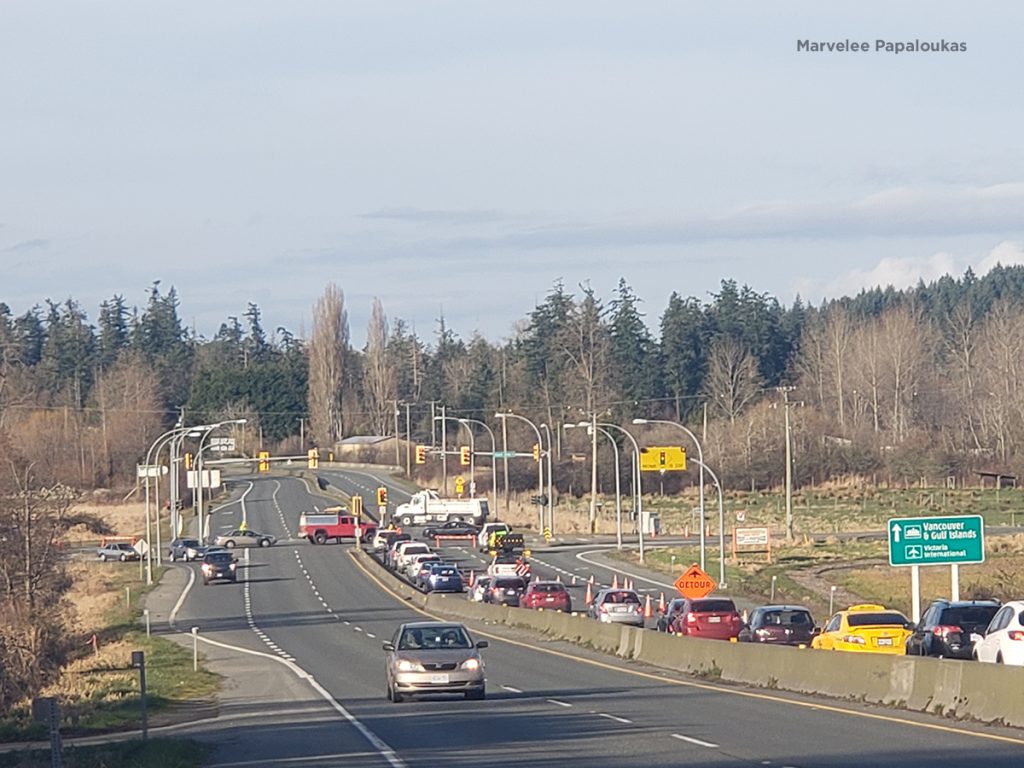 The Central Saanich Police Service said traffic was extremely slow in the area and diversions around the highway were in place. Traffic started flowing normally after the highway reopened.

The B.C. government has obtained an injunction for Highway 17 (including ditches, curbs, gutters and roadside barricades) from Tolmie Road at the City of Victoria’s municipal boundary to Landss Ed Road in the north of the Saanich peninsula at the Swartz Bay Ferry.

The injunction from the Supreme Court of BC states demonstrators are prohibited from preventing, impeding, restraining or in any way interfering or counselling others to interfere with the movement of vehicles.

Police have the discretion to the timing and manner of enforcement, according to the injunction.

Central Saanich Police told CHEK before 5 p.m. they would allow the peaceful demonstration to continue before making an assessment at 5 p.m. The demonstration was scheduled to end at that time and ultimately did with no arrests.

The Pat Bay Highway has reopened as protesters have left the intersection at Mount Newton Cross. For the most part it was a peaceful protest; however, officers did step in to de-escalate one encounter. pic.twitter.com/0EhkqpQcCN

“Ultimately there’s many factors involved,” Const. Matt Ball with Central Saanich Police said. Ball said police look at the feasibility of arrests and trust within the community as examples.

BC Ferries already has an injunction for its terminals. It was issued earlier in February.

Police in Saanich and Central Saanich were already warning drivers Tuesday to be aware of a protest on Highway 17 from 2 p.m. to 5 p.m. on Feb. 26 following a screenshot that began circulating around social media.

Dave Eberwein, superintendent of the Saanich School District, said the district sent a message out to parents about a possible blockade “out of an abundance of caution.”

“We’re looking at making sure we can re-route buses if necessary. But not knowing what it will look like or what will be impacted, it’s more of a guessing game at this point,” Eberwein said.

The Victoria International Airport said they are also aware of the social media posts and said anyone with travel plans should allow extra time to get to the airport.

Advisory 25/02/2020: We are aware of social media posts about planned blockade of Pat Bay Highway tomorrow 2-5PM in…

The demonstration is separate from the ongoing one at the B.C. legislature. Indigenous youth are gathered at the steps of the legislature in support of the Wet’suwet’en hereditary chiefs. They have been camping on the property since Monday.

Blockades in Quebec and Ontario

Protesters behind rail blockades in Quebec and Ontario ramped up their actions and rhetoric Wednesday as government officials accused them of compromising public safety.

In a video posted on the Real People’s Media website, demonstrators in Tyendinaga Mohawk Territory near Belleville, Ont., were shown standing on rail tracks as a CN Rail train approached Wednesday, then jumping out of the way at the last second.

Provincial police said a handful of protesters also lit fires near and on railway tracks at a secondary camp that remained in place after a raid on another, larger blockade earlier this week.

“It is extremely concerning to see people endangering their own lives and the lives of others by trying to interfere with the trains,” Trudeau told reporters.

Meanwhile, Quebec Premier Francois Legault suggested provincial police had not moved in to dismantle a blockade on the Kahnawake Mohawk territory south of Montreal because those on the reserve are armed, potentially with assault rifles.

His comments, which came as protesters on the Mohawk territory south of Montreal reinforced a blockade that has been in place since Feb. 8, were unequivocally rejected by the First Nation, which stressed the demonstration is a peaceful one.

Kenneth Deer, the secretary of the Mohawk Nation at Kahnawake, said the protesters are not armed and the suggestion that there are AK-47s at the site is “highly irresponsible and ludicrous.”

Earlier in the day, Deer spoke out against a possible intervention by outside police, saying any efforts to forcibly remove the site would be seen as an “act of provocation and aggression that will exacerbate an already volatile situation.”

“Ultimately, coercive state-sponsored force is the wrong way to make peace,” Deer said in a statement.

The Assembly of First Nations of Quebec and Labrador also took issue with Legault’s statements, urging him to be more careful in discussing the issue.

“Premier Legault is making very dangerous and offensive comments by suggesting the presence of weapons in Kahnawake,” AFNQL Chief Ghislain Picard said in a statement.

“He certainly did not consider the consequences of his words for community members who live with the memories of 30 years ago on a daily basis.”

The rail company obtained an injunction on Tuesday to end the blockade, one of several such protests in support of Wet’suwet’en hereditary chiefs who oppose a natural gas pipeline cutting across their traditional territory.

Rail and road disruptions have continued in recent days after several high-profile blockades were dismantled by police in B.C. and Ontario earlier this week.

The agency responsible for a major commuter rail service covering much of southern Ontario said Wednesday it was not anticipating any of the delays and cancellations that brought trains to a standstill during the previous day’s rush hour.

Metrolinx, operator of the GO Transit network, suspended service Tuesday on multiple routes as a series of protests sprang up in and around Toronto.

City police said they arrested three people at the demonstrations. They said Wednesday morning that officers provided protesters with an injunction and began moving them from rail tracks.

The blockade had threatened to delay morning commutes west of the city, but police said the rail line has been cleared and most commuter rail lines were running on time or with minor delays.

Demonstrators also set up new sites in Ontario and Quebec this week, though some dispersed or were dismantled in less than a day.

A protest at a GO station in Hamilton caused numerous cancellations and delays starting Monday evening, but local police said protesters left the blockade site in the city peacefully at around 5 p.m. Tuesday.

Other new disruptions that surfaced Tuesday included a blockade along a highway near the site of an ongoing land dispute in Caledonia, Ont., and one along a stretch of rail in Sherbrooke, Que., about 150 kilometres east of Montreal.

Police moved in to end the Sherbrooke blockade on Tuesday afternoon, arresting protesters who had blocked a rail line in the city’s Lennoxville district. The protest along Highway 6 in Ontario remains active.

The hereditary chiefs of the Wet’suwet’en Nation, whose opposition to the Coastal GasLink project has spurred the widespread protests and disruptions, were meeting in British Columbia on Wednesday. Federal officials said they were waiting to hear whether the hereditary chiefs would invite them and their provincial counterparts to discuss the issue.

One of the hereditary chiefs, Na’moks, who also goes by John Ridsdale, suggested progress was being made in reaching the conditions they have set for such a meeting to take place.

With files from Morgan Lowrie, Paola Loriggio – The Canadian Press, along with Liam Casey in Toronto and Teresa Wright in Ottawa.

Timeline of COVID-19 cases in Canada
Names in the mix: an list of potential Conservative leadership contenders