The provincial ministry in charge of forests is sending biologists to the Fairy Creek region following reported recent sightings of Western Screech-Owls, which are protected under the federal Species at Risk Act.

David Muter, Assistant Deputy Minister for the Resource Stewardship Division of the Forests and Lands Ministry, confirmed with CHEK News that a team of biologists is headed to where the sightings happened in Caycuse/Fairy Creek area.

“We’re going to be having our team out there on the ground trying to develop a plan on that specific site to make sure we’re doing everything we can to protect these owls,” said Muter.

The University of British Columbia’s Dr. Royann Petrell, who was the first to document threatened Western Screech Owls in the Caycuse/Fairy Creek area, has just returned from another trip to the region and says she saw one fly overhead while at the Fairy Lake Recreation Site.

“[It is] very significant because I don’t think anyone’s ever observed a screech owl in that area of Fairy Creek, at least officially,” she said.

Petrell, who has previously reported 10 owls in six different locations within the region, says during her latest trip she’s also documented a Band-tailed Pigeon and an Olive-sided Flycatcher — birds that are on the federal government’s list of special concern.

“I hope this time the government listens and halts the logging of the old-growth and all around for kilometres around where we saw the sightings,” said Petrell.

Petrell has sighted the owls on either side of the Fairy Creek watershed but none within it.

It comes a day after B.C. Premier John Horgan announced a plan to modernize regulations in the forest industry, which has since drawn criticism from the Ancient Forest Alliance.

“John Horgan barely mentioned old growth in his presentation and true modernization of BC’s forestry practices can only come when we address the ecological crisis that we’re in. It needs to be rooted in the survival of B.C.’s endangered old-growth forests,” said TJ Watt of Ancient Forest Alliance.

The head of the British Columbia Council of Forest Industries says it’s looking forward to helping shape the plan with the government and it wants to move the old-growth discussion.

“People are looking to products that are made from forest fibre that are sustainably managed as part of the climate solution and I think it’s not an either-or conversation,” said Susan Yurkovich, the council’s chief executive officer and president. “We can have environmental conservation. We can have old-growth forests and we can have economic contribution and I hope we can move the conversation to that space.”

Petrell says she’s hoping the federal government, which has jurisdiction over migratory birds will get involved in halting old-growth logging in the region because she doesn’t believe the province will. 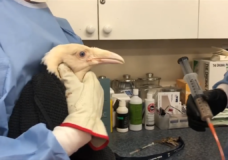 'There is just something magical about it:' Rare white raven rescued in Errington 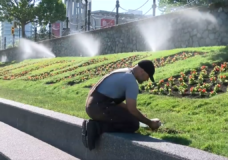