WATCH: Get on the bus, not the train. That’s the message from Premier John Horgan as a way of dealing with the growing gridlock originating from the West Shore. Horgan would like to see the E & N Railway line converted into bus lanes. Mary Griffin reports.

The E&N Dayliner passenger train used to run every morning until it ceased operations in 2011. The train would leave the Via Rail station and head west over the Johnston Street bridge.

Now, Premier John Horgan would like to see new life on those E&N tracks.

“It should be a corridor for moving people and I’m committed to doing that and that will happen in the term of this government,” Horgan said.

During his keynote speech to the Greater Victoria Chamber of Commerce earlier this week, and again today in Langford, Horgan stressed that buses are the future of the E & N Railway line.

“We can incorporate a rapid bus in that corridor more effectively, more efficiently than we could rail,” Horgan said.

The former Liberal government studied the cost of light rail on the tracks. The estimated costs came with a price tag ranging from $70 million to more than $165 million.

There is no budget for the project but many want to reduce the congestion that is only predicted to get worse as the population in the West Shore grows.

“It means that we are really going to look at some possibilities and some options for moving forward with some kind of transportation to move people through the E&N corridor,” Dean said.

But Langford city council is already in agreement with a rapid bus plan, according to Coun. Denise Blackwell.

“It’s nice and wide and there’s lots of room for it. It was always destined to have something besides our rail trail. So I think it’s a fabulous idea,” Blackwell said. 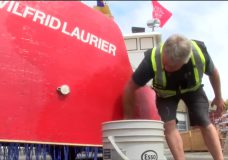 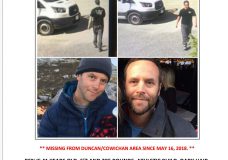