WATCH:  More than 90 groups will be working hard this weekend on their routines, signs and floats ahead of Monday’s Island Farms Victoria Day Parade. Among the most popular entries are first responders and the Canadian Forces who have been a proud part of the parade’s 120-year tradition.

In less than 72 hours, tens of thousands of people will watch floats pass by during the Island Farms Victoria Day Parade.

Kicking off the parade will be a flyby by the Royal Canadian Air Force.

“We’re sending two aircrafts so the helicopter will be coming by at 500 feet and then we’ll have the CF-18 Hornet will come nice and quick watch out for your ears,” says Capt. Brian Norwick of the 443 Maritime Helicopter Squadron in North Saanich.

This year’s military show will be a tribute to those affected by the Humboldt tragedy.

“We’ve all sort of felt that personal connection in different ways to the tragedy,” says Capt. (Navy) Jason Boyd, CFB Esquimalt Base Commander, “I myself am from Saskatchewan. I’ve travelled those roads playing hockey and I was a listed member of the Humboldt Broncos at one time so this is a great opportunity for us to show our support to them.”

Meanwhile, first responders are also getting ready for their traditional part of the 120-year-old parade, including the Canadian Coast Guard’s Victoria base.

“I just started with a trailer and then I started building,” says Canadian Coast Guard electrician Jeff Cox.

The Coast Guard’s float has been a four year labour of love for Cox. The ship-inspired float is made from recycled pieces the Coast Guard couldn’t use anymore. Every year, Cox says he adds more details from lights to flags to mechanics.

“We have a fully functional derrick that will raise and lower the buoys,” adds Cox who has put more than 1,000 hours on the project.

The flyby will take place at approximately 9 a.m. on Monday, May 21. 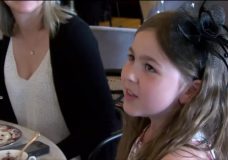 Join in on these royal wedding festivities around Victoria 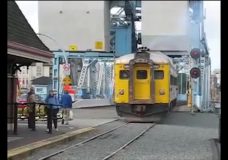