Posted: Aug. 4, 2020 6:20PM
CHEK
WatchThe owner of the service dog is pleading with the owner of another dog to take responsibility so a recent attack can be put on the record.

A Port Alberni Service dog is recovering after it was attacked by another dog.

While its injuries aren’t considered severe, the impact of the trauma has the dog’s owners worried about her future and whether she’ll be OK to work again. They’re also pleading with the other dog’s owners to come forward.

Natasha Creelman said her licensed service dog Ladybug has been crucial for her quality of life.

“I can’t function without her,” said Natasha.

“I have complex post-traumatic stress disorder along with a few other illnesses she’s managed to adapt to. She gives me the confidence to go out. She protects me.”

Her Dad returned home after walking Ladybug Sunday morning and told Natasha her dog had been injured by another dog.

Her dad said he was near the entrance of the Log Train Trail on Argyle Street when a woman with her white-tan dog, slightly smaller than Ladybug, walked by.

“And just after they got past us, because the dog wasn’t on a leash, the dog attacked Lady,” said Barrie Kreelman, Natasha’s father.

They didn’t exchange information because they didn’t realize Ladybug was injured.

On Tuesday morning, they took Ladybug to a veterinarian. He found she had a really deep gash on her ear, a couple of puncture wounds on her neck and a puncture wound on her paw. She’s now on pain medication and antibiotics to fight an infection.

They say their real concern is the impact this will have on Ladybug.

“You really can’t take her out to work right now. We don’t know how she’s going to react when she meets other dogs on the trail again. It could traumatize her,” said Judy.

“I’d like the person who’s responsible for this to come forward and man up,” said Natasha.

“I would also like people to be more responsible for dogs and if they’re able to go off-leash do you have full control of them while they’re off-leash?”

The Kreelmans have filed a report with the RCMP and SPCA. 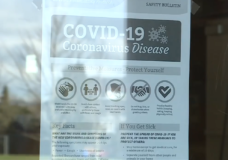 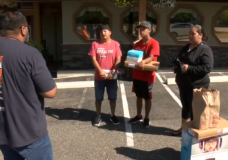