An aircraft with a Vancouver Island connection has now joined the firefight near Kamloops.

For the first time in six years, the provincial forest service has employed a Coulson Aviation Aircraft that’s based out of Port Alberni.

The Coulson Group in Port Alberni has been making a name for itself worldwide with the largest fleet of initial attack planes and helicopters for fighting fires.

It has firefighting contracts in the U.S., Australia and Chile and just this week it has landed a contract again on its home turf.

“On the weekend before we put one of our S-61’s back on the U.S. government we phoned up to BC to see if they needed the support and they did so they brought us up from California to up in the Kamloops area,” said Wayne Coulson, The Coulson Group‘s chief executive.

The Sikorsky helicopter carries a thousand gallons of water and is on contract for five days and depending on the province’s needs it could stay longer.

Coulson says he’s thrilled to be on home turf fighting fires again and they could potentially provide even more support.

“We have one other S-61 helicopter that could be available to the province if they required it and of course, being from British Columbia our priority is our own province so anything we could do to help here we would certainly look to see what we could do to facilitate any support,” said Coulson.

Coulson Aviation still owns two of the famous Mars Water Bombers but the company has since focused on new firefighting technology and retrofitting other large aircraft to fight fires.

“I think it’s pretty incredible. From what I’ve heard the fact that the Coulson can do the night flights which we haven’t had yet. I think it’s really important with the Sparks Lakes fire it’s so big. Night flights are definitely needed,” said Thompson.

But while Coulson Aviation can fight fire at night with its helicopters the company says that hasn’t been part of its B,C, government contract as of yet. 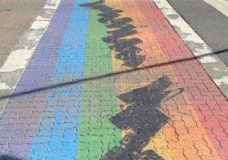