In a small corner in Chinatown’s Fan Tan Alley in Victoria is a new pop-up museum exhibit, a small but significant walk-through showcase of some of Chinatown’s history.

“There are stories to be told in the alleys, in the courtyards, in the buildings and we think this is something that will inspire people and invite more people to learn about Chinese Canadian history,” said Alan Lowe, chairperson of the Victoria Chinatown Museum Society.

Chinese history is a rich and important part of B.C.’s past that dates back to 1858.

“This area actually has connected the transpacific region and B.C all the way to its interior and this was the major gateway of Canada, opening up to the Pacific. That in itself was really important. This was the key place,” said Tzu-I Chung, a Royal BC Museum curator who helped put together the short-term exhibit in Fan Tan Alley.

This exhibit not only tells the stories of Chinese Canadian beginnings but stands as a meaningful reminder.

“We are here celebrating that history and these people’s struggles and their contribution. We hope the society has a better understanding of the anti-Asian racism that has been historically there and continues today and in the COVID time,” said Chung.

The free exhibit includes a map of Chinatown in 1891 and a digital reconstruction of a Chinese free-mason lantern from Victoria in the 1930s.

This short-term pop-up could be part of a bigger, more permanent plan.

“We’re working with the province and we’re hoping that we’ll have a regional hub here in the oldest Chinatown in Canada,” said Lowe. “Not only will there be a museum but outside, there will be a living museum.”

And he’s confident of its chances.

“I think that the probability of having a permanent location is great, I think we could work hard in our community to make that happen,” said Lowe, who also previously served as Victoria’s first-ever mayor of Asian Heritage from 1999 to 2008.

The exhibit, Peering into the Past: Celebrating Canada’s Oldest Chinatown, is located at 103-3 Fan Tan Alley. For more information, visit https://victoriachinatownmuseum.com/

Your Money for July 24 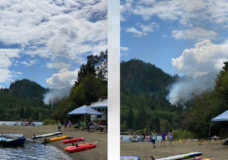