File Photo
Two incidents only 8 hours apart on Sunday have police warning the public about a male suspect.

VicPD issued a warning Sunday evening after two incidents in which a man attempted to force women to accompany him against their will.

Police say the incidents both occurred on Sunday, within eight hours of each other, and are treating one of the incidents as an attempted kidnapping.

In the first incident, a female victim was grabbed from behind at the intersection of Blanshard and Johnson just after 3 a.m. by a man. The man then attempted to get her to go with him. The woman was able to escape without physical injury.

In the second incident, another female victim was returning to her vehicle near Bastion Square when she was also grabbed from behind by a man. The man brandished a knife and told her she needed to go with him. The woman was able to break free and fled, and was not physically injured.

The suspect in the second incident was described as a Caucasian man, approximately 45-years-old, wearing a long black trench coat, dark sunglasses, and a black toque. He had long hair worn in a pony tail, walked with a slight limp and spoke with a French Canadian accent.

VicPD says this description resembles the suspect description in the incident earlier on Sunday morning.

Police are asking the public for anyone with information about either of these incidents, or who recognizes the suspect, to contact the VicPD non-emergency line at 250-995-7654. Those wishing to report anonymously can call Greater Victoria Crime Stoppers at 1-800-222-8477. 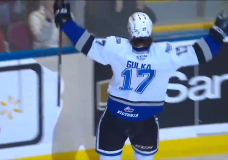