Looking at the wreckage, it’s hard to believe no one was killed or even seriously hurt in a Shawnigan Lake school bus crash Friday morning.

“When I saw that rowing shell through there I thought it was going to be a lot worse,” says Shawnigan Lake Fire Chief Keith Shields.

The school bus, from School District 79, was heading east when it smashed into a truck and trailer from the Canadian National Rowing Team on Renfrew Road at Decca Road near Shawnigan Lake School just before 8 a.m.

“We were coming up here to turn the truck around to go back down to the boat shed and the bus came around the corner and got onto black ice and slid sideways into us,” says Canadian National Rowing Team coach Dick Tonks, who was a passenger in the truck.

The force of the crash sent one of the rowing skulls flying through the window of the bus, narrowly missing the driver. But incredibly, he and the 12 children on board were able to escape.

“The driver managed to get the kids off, get them to a safe place, so they were away from the accident and safe from any other vehicles,” says Const. Wes Richens of the Shawnigan Lake RCMP.

Police say the bus driver did all that despite a broken arm. The driver of the truck was also hurt, but not seriously. His two passengers weren’t injured and first responders say the kids only had minor injuries.

“Just a couple bumps and bruises, nothing major at all, so people got away extremely lucky on this one,” says Shields.

RCMP say icy road conditions are to blame. The road hadn’t been sanded and salted and just minutes before the bus lost control, a white pick-up truck hit black ice at the same corner and went off the road.

“With the snow melting during the day, it freezes at night so just take extra time, slow down and increase your following distance between other vehicles,” cautions Const. Richens.

The road was shutdown for two hours, leading to a long line-up of logging trucks waiting to get through.

Flatbed tow trucks had to be brought in to remove the vehicles and the rowing skulls were carted away by members of the team.

Police say the fact everyone could walk away from this crash is “miraculous”. 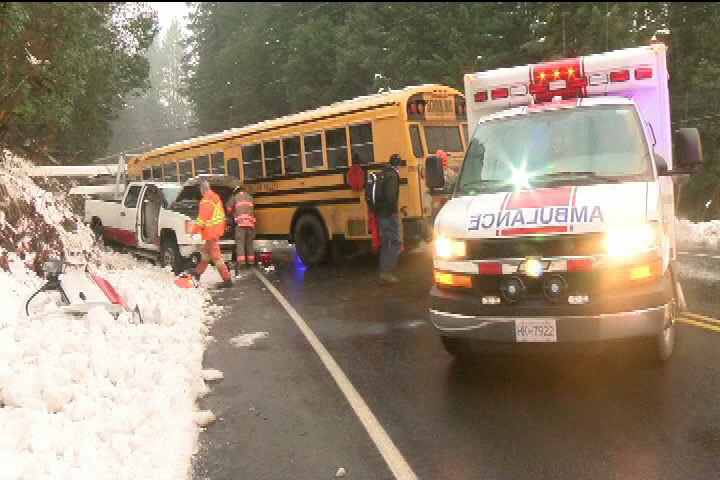 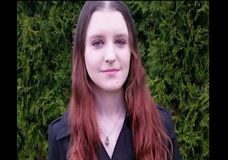 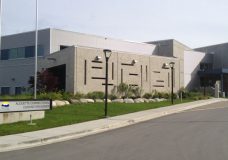