A large pig on Vancouver Island was stabbed repeatedly in a botched attempt to slaughter the animal, and authorities are now trying to find the people who did it.

Michelle Singleton, founder and president of A Home for Hooves Farm Sanctuary in Duncan, said an eight-year-old male Yorkshire pig named Cyrus was recently surrendered to her organization after it was stabbed multiple times with a kitchen knife by a couple of people.

“Honestly, this is the worst case of animal cruelty that I’ve ever personally been involved with,” she said

Singleton said the incident happened in the Victoria area and that the stabbings were intended to kill Cyrus but didn’t because they missed his heart.

“To actually physically stab an animal with the intention of hitting them in the heart when you don’t know what you’re doing, it’s incredibly cruel and essentially torture,” she said.

Fortunately, Cyrus has been receiving treatment from veterinarians since he was surrendered to A Home for Hooves. He is currently being cared for at an undisclosed location and is progressing well, according to Singleton.

Saanich Police told CHEK News in a statement that the stabbings took place on Oct. 29 and that they are investigating.

“We have identified and spoken to the persons responsible and are working with the BCSPCA. Causing unnecessary suffering to an animal is an offence under the Criminal Code of Canada (section 445.1),” said Const. Markus Anastasiades, media relations officer with the Saanich Police Department.

Kaley Pugh, the BC SPCA’s regional manager of animal protection services for Vancouver Island, confirmed that her organization is conducting an investigation.

“Unfortunately, I can’t get into a lot of the details of the situation right now because it is an ongoing investigation,” she said. “But, we can certainly confirm that an investigation is underway and that we’re doing everything we can to find out what happened in this incident and also make sure that any other animals are not in distress.”

“Stabbing an animal would not be considered a humane method of euthanasia regardless of why you were trying to euthanize the animal,” said Pugh. “Stabbing it certainly wouldn’t be an acceptable method for a pig or for any other animal.”

Animal abuse and cruelty towards animals of all kinds is, unfortunately, a reality on Vancouver Island.

“Luckily, it’s not something that happens regularly,” said Pugh. “Most people take good care of their animals.”

In 2018, there was widespread outrage after a potbellied pig that had been removed from an abusive situation and adopted out by the BC SPCA was butchered and eaten by its new owner in the Cowichan Valley.

A year later, a Duncan man received a 90-day suspended sentence after pleading guilty to causing unnecessary pain, suffering and injury to a dog in what the BC SPCA described as one of the most “disturbing cases of abuse” they had ever seen.

And last year, the BC SCPA opened a 3,600-square-foot facility in Nanaimo that cares specifically for abused and neglected farm animals.

“Luckily stuff like this isn’t stuff that we have to deal with very often,” she said. “I’m just happy that we were aware of the situation and we’re able to investigate the matter.”

A foster home has been secured for Cyrus in Mission, but Homes for Hooves is trying to find one on Vancouver Island so he can be closer to them in order to receive care.

“I need him to be in a safe foster home,” said Singleton, adding that her organization is already caring for 49 other pigs, and has no more space.

Singleton said Cyrus weighs about 500 pounds, has yet to be neutered — though that will happen sooner rather than later — and, being an eight-year-old boar, has taken an interest in the opposite sex.

“He’s gonna get a little bit excited when there are some other female pigs around,” she said. “He is more focused on that.”

The ideal foster parent will need to be able to provide Cyrus with a safe and secure location, said Singleton.

“I am looking for someone who would be comfortable working with him and putting him in a secure location where he is not going to be able to get out,” she said, adding. “Because he is still intact and he is going to want to try and get it out.”

Singleton said Cyrus is a “big boy” who has spent his entire life being used for breeding purposes and is fairly happy, despite his recent ordeal.

“He seemed quite friendly … I brought him some pumpkin just so I could see how he’s behaving and how he’s moving around,” she said, adding. “I’m told he’s quite a sweet boy.”

Anyone interested in providing a foster home for Cyrus is asked to e-mail [email protected]. 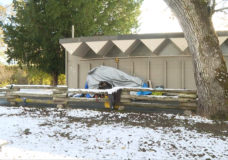 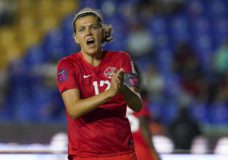