The annual Beach Festival in Parksville has been cancelled for the second year in a row due to COVID-19.

The sand sculpting competition has been around in one form or another since 1982 and an estimated 125,000 people would have attended this year, according to organizers.

“You know I’d like her to grow up and see the sandcastles like I saw when I was growing up,” said Kellee Jylli, who was at the beach Monday with her young daughter.

In 2015, more than 100,000 people attended the Beach Festival, which generated $18 million in spending over the five-week period.

Cheryle Dill, the Beach Festival Society’s president, said all that extra spending as a result of the festival provides a big economic boost to the region.

“We know that when that grows even more, the spin-off is just that much more,” said Cheryle Dill, Parksville Beach Festival Society President. “So it’s a major effect on the economy when you have events that are such a popular destination as this one being canceled.”

Sculptors come from around the world and their travel arrangements could not be guaranteed due to the pandemic.

“It’s amazing how many people you meet who come from around the world,” said Parksville resident Gloria Anderson who was at the beach Monday and used to work at a local resort. “I mean it’s Europe, it’s the States, it’s everywhere, Eastern Canada.”

Hotel occupancy in Parksville Qualicum area last year was in the 70 to 90 per cent range, boosted largely by Vancouver Islanders vacationing at home.

“People have managed how to vacation close to home and I guess there are some people who would normally spend a lot of money on travel elsewhere and they’re doing it locally so we’ve done OK,” said Parksville-Qualicum Tourism chair, Pat Jiggins, who also owns Paradise Adventure Mini-golf and RV Park.

He hopes “staycations” help the bottom line this year too.

The festival society is proceeding with the construction of a new performance stage for the summer concert series and all eyes are already on a successful return of the Beach Festival in 2022. 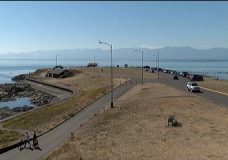