The parents of two teen girls who were murdered by Paul Bernardo are seeking to obtain his entire file with the parole board, arguing public interest in the case outweighs the convicted killer and serial rapist’s privacy rights.

The families of Kristen French and Leslie Mahaffy are also requesting audio and video recordings, as well as any written transcripts, of Bernardo’s failed bid for parole in October 2018.

The two families filed for judicial review this month after their requests for the documents under access to information legislation were denied.

In the filings, their lawyer Tim Danson argues the decision goes against the principle of transparency and could lead to Bernardo being released without supervision.

He also argues denying the families’ requests for the documents breaches their charter right to freedom of expression because it prevents them from fully participating in the parole process and from expressing their opinions on a matter of public interest.

Given the attention paid to Bernardo’s crimes and that much of the materials sought were already in the public record, Danson argues the information cannot be withheld on privacy grounds.

The Parole Board of Canada “ought to have found that Bernardo had surrendered his privacy rights when he chose to murder two teenage girls and raped so many others,” he wrote in the documents.

“In this balance, (the parole board) failed to find that Bernardo committed a crime against society and humanity at large that far outweighed any purported personal privacy right.”

Bernardo has served more than 25 years of a life sentence for the brutal kidnapping and killing of French, 15, and Mahaffy, 14.

He was rejected for day or full parole on Oct. 17, 2018, with parole board members expressing doubts that he had truly come to understand his horrific actions.

He was convicted in 1995 of first-degree murder, kidnapping and aggravated sexual assault among other offences. His crimes over several years in the late 1980s and early 1990s sparked national horror.

Bernardo and his then-wife Karla Homolka kidnapped, tortured and killed Mahaffy in June 1991 at their home in Port Dalhousie, Ont., before dismembering her body, encasing her remains in cement and dumping them in a nearby lake.

Bernardo tortured and killed French in April 1992 after keeping her captive for three days.

The girls’ families made their initial requests to the parole board and to Correctional Service Canada for his file in 2017, then updated them to include the recordings of his parole hearing, according to the court filings.

Their requests were rejected last year, prompting them to file a complaint with the Office of the Information Commissioner of Canada, the documents say.

The office upheld the parole board’s decision last month but has yet to weigh in on the correctional service’s ruling, the documents say.

This report by The Canadian Press was first published on April 23, 2020.

This report by The Canadian Press was first published on April 23, 2020. 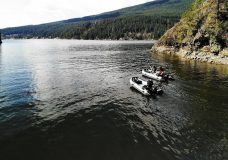