WATCH: Travel headaches started Thursday as Vancouver Island residents headed out during one of the busiest travel weekends all year. April Lawrence reports.

It was bumper to bumper traffic for several kilometres on the Malahat Thursday.

But it wasn’t rush hour ? it was noon.

“We thought we’d beat the traffic by coming up here Thursday and lo and behold we ran into traffic,” Carol Legrand said.

Highways crews were busy trying to get a second lane open for the afternoon, but it wasn’t in time for thousands of motorists trying to leave the city who still had to merge.

“When you’re instigating counter-flow on this road, it does take time, you want to do it as safely as possible,” said Transportation Minister Claire Trevena.

It’s not just the construction creating massive delays on the Malahat this summer, there are also more cars.

July saw a record-breaking seven per cent increase in traffic on the Malahat, with 33,000 vehicles passing through a day ? 3000 more per day than is typical.

For people heading off the Island this B.C. Day long weekend, traffic was already starting to build Thursday as B.C. Ferries prepared for its busiest weekend of the year.

Those thinking of making a last minute reservation may be too late.

Many of Friday’s reservations, from Swartz Bay, Duke Point, and Departure Bay, are sold out.

And walk-on passengers could also see a wait.

“We may max out on our passenger count, so it is a good idea if you’re traveling as a foot passenger to arrive earlier than you normally would to secure your spot on that sailing,” said Marshall.

For some who prefers to fly, there’s always Harbour Air, but they’re just as busy.

“We’re sold out this afternoon, I think we’ve got one seat left, so there are already people getting on their way,” said President Randy Wright.

If people can travel Friday morning, or even Saturday, they may still snag a seat.

So if you’re planning to travel anywhere this long weekend, prepare to pack some patience. 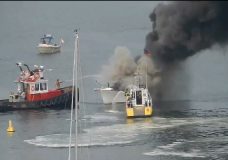