An Esquimalt man is facing an animal cruelty charge after police found his roommate’s cat inside a carrier that appeared to have been in a large amount of water.

According to Victoria police, officers were called to a residence in the 600 block of Head Street in Esquimalt just after 7 p.m. on Aug. 1. Police said a woman had found blood and her cat missing after arriving home at her shared residence.

The woman told police that her roommate said he had been bitten by the cat. Police said when the woman asked where her cat was, the roommate allegedly assaulted her and fled on a bicycle. The woman was not injured during the alleged assault.

The cat was in medical distress, police said, and was taken to a downtown animal hospital. The suspect faces one charge of assault and one charge of animal neglect/cruelty in connection with the alleged incident.

VicPD officers said the woman has a large bill for the cat’s diagnostics and treatment. Police did provide for the initial costs to diagnose the cat. Due to an outpouring of offers to support the victim, police said the veterinary costs have been covered and the cat is recovering.

Damaged vehicle found after report of gunshots in Royston 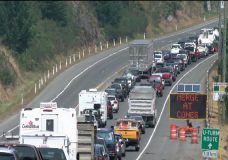