April 27, 2020 updated
CHEK
WatchEvening meal, clothing and service referrals among what's being offered to Nanaimo's homeless but neighbours don't like where it's happening

A number of organizations have started offering services together to Nanaimo’s homeless each evening.

They include a meal, harm reduction materials and referrals to government services but some nearby neighbours are upset about the location chosen for this to happen.

It’s all happening on Wesley Street, where Nanaimo’s homeless gather despite the city stepping up bylaw enforcement this year in the area.

“Our goal is to support some of the most vulnerable people in our society. The ones that don’t have a home to take shelter in,” said Tanis Dagert, of Food for Thought.

Food for Thought has been quietly operating for just over a month.

The organization has been revamped and received charity status since it previously gave meals as Stone Soup, which operated from a yard in Wisteria Lane but was shut down by City of Nanaimo last year for a lack of proper zoning or building permits.

“Stone Soup has evolved into a bigger community collaboration that we’re calling Food for Thought and so the Wisteria Community Association provides the sandwich bag lunches and volunteers to make it happen and other groups have jumped on board to support them,” said Dagert.

But despite their charitable actions, Food for Thought has received numerous complaints from neighbouring businesses and homeowners saying it’s too close to home, and not everyone is socially distancing.

“Of course none of us really want this in our backyard but at the same time, this is the downtown core. There are other food programs in the area. The [overdose prevention] site is down the way and this is actually a really great spot to connect with people,” said Dagert.

Each night volunteers are giving out an average of 125 sandwich bags, and plan to keep doing so, to help those most in need in their community.

Those accessing the food and services appreciate the help.

“I feel peace in my mind knowing that I’ll eat always,” said Ben McCreery, one of Nanaimo’s homeless.

“Who else is going to do it? Who else? Taking the time out of their lives for all of us,” said Gerhard, another homeless man who did not want to give his last name. 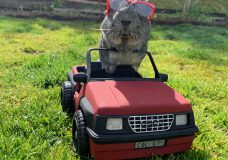